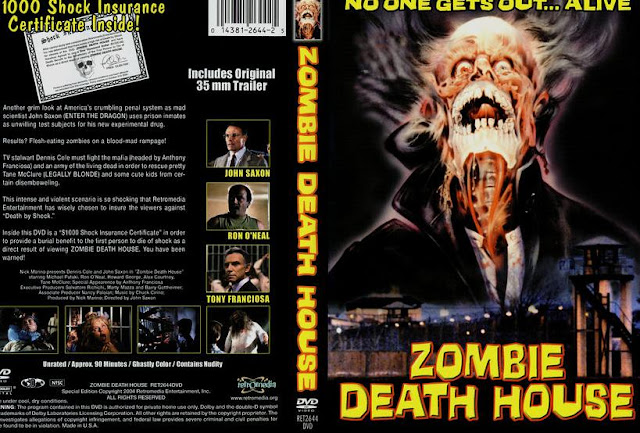 Prison. Zombies. John Saxon stars and directs.  A DVD that comes with a certificate warning that it may, in fact, shock me to death.  Expectations are flying high in the room here, and I can’t help but feel like this 1987 film can’t possibly deliver everything that Starkwell and Lovelock are hoping to get from it.  Let’s hope it at least gets an ‘A’ for effort.  Failing that, hopefully they’ll get some good laughs out of it.

Lovelock: I’m more confused than anything.  Is he banging the mobster’s girlfriend, or is that a flashback?

Starkwell: I think that shot of the jungle was Vietnam.

Lovelock: Maybe that was a flashback.

The movie seems to be throttling forward at breakneck speeds, including some kind of elaborate plot to eventually get the main character, Derek, into prison.  It’s awkwardly paced, edited in a peculiar way and random narration and slow-motion shots cause Starkwell to become increasingly uncomfortable.

Lovelock: Oh man, Roper is up to his old tricks.

Starkwell: What does that even mean?

Once Derek gets to prison the movie still doesn’t really slow down at all, but one thing that Starkwell noted was that “are we supposed to be rooting for anyone?”  Lovelock said he’s rooting for John Saxon.

[Dr. Saxon calls up the biochemical engineer that worked on the zombie virus, who is apparently a reporter now.  Because that is the usual career path for scientists.]

Starkwell: Extra, extra, read all about it… this movie blows.

Lovelock: Maybe you’re not watching it properly.  Focus on the awesome.

Lovelock: Ok, well… not there.

[Reporters show up, five of them, in an old cheap car.]

Starkwell: What did they do, carpool to the scene?

Once the inmates organize themselves and start making demands, the movie slows down.  The fact that the first half of the film moved so quickly makes it so that when it slows down, it feels extra slow.  By the time the zombie mayhem started up, it was too late, Starkwell was already fast asleep.

[The Warden tries to wrestle the pick axe out of Moretti’s hands.]

Lovelock: He just handed the pick axe to him a minute ago.  If he wanted the pick axe, why didn’t he use it when he had it?  STARKWELL!  You’re missing some real winning film making here.

Then Derek had a sex dream about Blonde Biochemist Reporter.  Likely just as an excuse to show the actress’ boobs.

[Kid on Skateboard knows the secret way out of the prison.]

Lovelock: Starkwell, seriously, this is incredible… you need to wake up.  They’re following a kid riding on a skateboard.  A skateboard!

Lovelock started laughing so hard that Starkwell woke up.

[The group has to walk past a hallway of zombie arms trying to grab them.]

Lovelock: I told you!  Do you see the awesome now?

Starkwell: No.  Why was there a kid on a skateboard?

The movie ends with ‘splosions, twists and, for some reason, an ass kicking Dead Kennedys song.  Lovelock stands up and starts rocking out all over the room.  Starkwell wishes he had stayed asleep.  I guess they will have to agree to disagree on this one.
Documented by Kev D. and Posted at 18:58