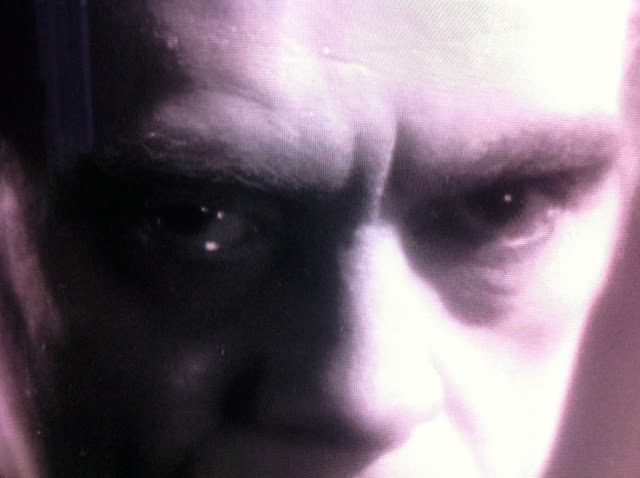 Long before the now popular comic and television show of the same name brought the Romero-style Zombie Apocalypse into modern pop culture (seriously, it's fucking everywhere), Boris Karloff starred in the 1936 classic “The Walking Dead”.  Let’s see how the best Frankenstein Monster ever handles a more subtle walking corpse role, strangely similar to his role in the equally underrated classic, "The Ghoul".  Let’s see how Starkwell and Lovelock react.

[Some rich asshole is in court being charged with crimes.]

A bunch of rich dudes in a house talk about killing the judge in the court case.  Karloff plays an ex-con who shows up at the house looking for work.  Turns out they are going to set Karloff up and frame HIM for the judge’s murder.  Karloff’s character is so sad and so dark.  We are introduced to a doctor’s assistant Jimmy and his girlfriend Nancy.  They witness the whole frame-up.

[Jimmy and Nancy don’t step forward with the truth, Karloff is sentenced to death.]

Lovelock: In conclusion, Jimmy and Nancy are pieces of shit.  Man, he’s just a musician trying to make it in this crazy world.

Starkwell: Karloff as the tortured soul… PERFECT!  But yeah, Jimmy and Nancy are definitely turds.

[All of a sudden Jimmy and Nancy step forward, but, too late, Karloff’s dead.]

Starkwell: So they sit through the whole trial, say nothing.  Months go by, appeals… nothing.  THE DAY HE IS BEING PUT TO DEATH… they can’t take it anymore?

Starkwell and Lovelock are getting into it, but Lovelock is still unable to ignore that it is taking a long time to go anywhere.  And when the movie is only an hour, that can be a real issue.  Anyways, eventually Jimmy and Nancy try and revive Karloff.  There is absolutely no explanation as to how they got their hands on the body… but I guess that isn’t important.

Lovelock: Maybe the governor felt so bad after finding out he really WAS innocent that he decided to let a couple of mad scientists fuck around with his dead body…

Lovelock: I know if I was wrongfully put to death, I would want them to donate my body to the Mad Scientist and his Selfish Assistant that was too much of a pussy to step forward with the truth while I was still alive…

Lovelock: No.  They should send Jimmy and Nancy to jail and kill them.

Dr. Beaumont, Jimmy and Nancy revive Karloff.  The world is informed, and the Mad Doctor is now famous, as is THE WALKING DEAD man.

[Radios and Newspapers all over the world tell the tale of the resurrection.]

Lovelock: It seems to me that the world seems a lot less shocked than they should, given that they brought a dead person back to life.

Everyone tries to get Karloff to remember stuff.  He can’t.  He just walks around slowly, talking slowly, and being slow.  Strangely he remembers how to play the piano.  Slowly.

Lovelock: Is the point that the girl looks like Princess Leia? Because she does.

Starkwell: That is very much not the point.

Suddenly Karloff gets all mean when one of the dudes that framed him shows up.  Even though he would have no way of knowing, he somehow knew that this guy was his enemy.  Lovelock got all happy, stating “LET THERE BE SOME KILLING!”  Then it got all dialoguey again and he was like “I said now God Dammit.”

[The Framers are terrified of Karloff and his piano playing.]

Lovelock: That’s why I want to learn to play the piano.

Starkwell: Yeah, that’s why.  Also, I’m pretty sure it’s his resurrection and not his piano playing that has them scared.

Karloff keeps visiting the guilty people and they go crazy and die (e.g. jump in front of a train, fall on a gun, etc.).  Lovelock is disappointed because of the lack of strangling, but happy with the sudden body count.

[The surviving members of the Frame-up Gang get a court order to have Karloff institutionalized.]

Lovelock: I can’t wait for those dudes to be dead.  Also, for this movie to be over.

Starkwell: What’s the matter with you?

Lovelock: Clearly, the answer is MEGA-boredom.

Lovelock: Also, why wouldn't Karloff be killing Jimmy and Nancy?  If they had just stepped forward sooner, he wouldn't be in this mess.  Weak.

Well, eventually Karloff is gunned down and dies RIGHT BEFORE he gives away the secrets of the afterlife.  Also, there was an impressive high-speed car crash.  ESPECIALLY impressive given that this was the mid nineteen thirties.  And, as is the case with so many older pictures, IMMEDIATELY after the final line of dialogue, the film ends with a big ass THE END.
Documented by Kev D. and Posted at 20:30