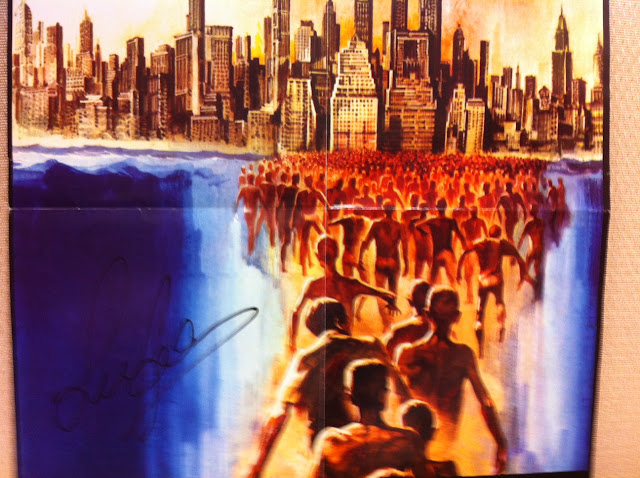 “Zombi 2”, or “Zombie”, or “Zombie Flesh Eaters”…  Whatever you should choose to call it, you must certainly call it amazing.  Lucio Fulci’s original undead splatter fest was often imitated, never duplicated.  Although made to cash in on the popularity of Romero’s “Dawn of the Dead”, “Zombi 2” ended up being something so much more than a coat tail riding blood soaked exploitation spectacular.  Well, it still is a coat tail riding blood soaked exploitation spectacular, but it’s such a good one!  This DVD from Shriek show has a second disc full of special features.  I know I’ll never actually watch them, but it’s nice to know that they are there.  After Lovelock and Starkwell enthusiastic reception of Fulci’s “The Beyond”, I’m curious to see what they will have to say about this one.
[...]
[Body Bag sits up, shot in head.]
Lovelock: I think I’m already in love.
Starkwell: You're sort of easy...
[...]
[Cops board sailboat, cop is eaten.]
Lovelock: That’s why I never board an abandoned sailboat.
Starkwell: Yeah, that’s why.
Lovelock: Well that and the pirate potential.
[...]
After the incredible intro scenes, the movie slows down a little as we are introduced to the characters more, and find out that West, the reporter, and Anne, the doctor’s daughter, are traveling to the islands to find out just what happened to her father.  Starkwell appreciated the character and plot development, I believe Lovelock said “I should be bored, but for some reason I’m not.”
[...]
[Then they randomly stop the boat so that Susan can scuba and photograph stuff underwater.  Naked.]
Starkwell: Why in the hell would she scuba dive naked?
Lovelock: She’s not naked.  She’s wearing one of those old fashioned bathing caps with the flowers.
[...]
Then a shark goes after Susan, but wait, that’s no shark.  It’s a zombie shark.  Then there’s an underwater zombie that attacks her.  Then, there is a zombie vs. shark fight, filmed with a real shark, and, honestly, quite possibly a real zombie.  Starkwell and Lovelock high fived and played air guitar.  This continued until it randomly cut to a scene of The Scientist’s Wife showering (with several mirrors placed around the shower, presumably so that we can see both her front and back simultaneously) with a zombie outside her window.  At this point, they stopped and resumed paying attention to the film.
[...]
[THE GREATEST EYEBALL GAG EVER FILMED.]
Starkwell: …
Lovelock: Why don’t they do that in every movie?
Starkwell: You mean every zombie movie?
Lovelock: No. Every movie.  Imagine how it would improve any movie.
Starkwell: You can’t have that in any movie…
Lovelock: Name a movie.
Starkwell: I don’t know… “The Horse Whisperer.”
Lovelock: ScarJo flies off the horse, and when Redford tries to catch her, she accidentally jams a screwdriver into his eye.  BAM! He wears an eye patch the rest of the film.  Totally improved.
Starkwell: Wait why would she be riding a horse with a screwdriver in her hand?
Lovelock: Look, do you want the movie to make sense, or do you want it to be better?
[...]
As the movie presses onwards at a deliberate pace and more is explained, we find out through flashbacks what the opening scene was all about.  Lovelock said it’s “even better the second time”.  Starkwell is noticing that the film manages to sprinkle a little bit of everything into the mix and that “if zombie movies were bagels, this movie would be an EVERYTHING BAGEL”, whatever that means…  Then they showed a group of zombies feasting on Eyeball Gag Girl and I think Lovelock wept a little.  Tears of joy, of course.
[...]
[Peter and Anne make out, in the dirt.]
Starkwell: So all of what they just saw put them in the mood?
Lovelock: Well-
[Zombies pop out of the ground all around them and grab them.]
Starkwell: Holy shit, those are real maggots!
Lovelock: I just got a boner.
[...]
As the zombie horde closed in on them, bunkered down in the church, one couldn’t help but notice how disgustingly scary Fulci’s zombies are.
[...]
[Zombie bites off Science Man’s face.]
Lovelock: Not much meat on the face… Kind of a dumb zombie if you ask me.
Starkwell: No one asked you.  Ever.
[...]
[Brian kills zombies.]
Starkwell: So wait, he shoots one in the chest, and then realizes that only a head shot kills them, but then makes the same mistake three or four more times?  Just shoot them in the fucking head, Brian!
Lovelock: Seriously.  Fool me once, shame on you.  Fool me twice, shame on me.  Fool me three times, go ahead and eat the girl I’m trying to save.
Starkwell: It hardly seems fair that she pays for his inability to learn…
[...]
[Zombies have overrun New York City.]
Starkwell: Why would there still be so much traffic on the bridge if the zombies are everywhere?
Lovelock: Look Fulci’s awesome, but I doubt he could get them to shut down the bridge just for that one shot.
Starkwell: Regardless, it’s still an amazing shot.
Lovelock: Oh shit, THE END!
[...]
Before the credits even finished rolling Lovelock was off in a corner somewhere making “Zombi 2” wallpaper for his bedroom.  Starkwell sat quietly, wanting more.  More Fulci, more McCulloch, more Zombi, more everything.  Unfortunately, we already know that “Zombi 3” won’t deliver the good stuff.
Documented by Kev D. and Posted at 20:10