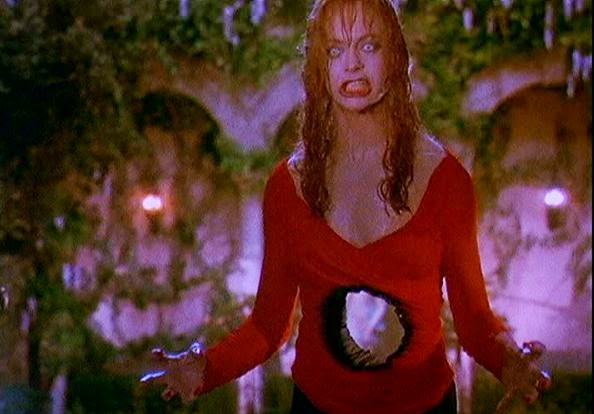 Robert Zemeckis doesn’t really need an introduction.  Let’s face it… the guy did the “Back to the Future” movies.  This movie came after that trilogy (as well as after “Who Framed Roger Rabbit”).  The movie that followed "Death Becomes Her" was “Forrest Gump”.  While I hardly feel that this movie will show itself to be the missing link between Marty McFly in the wild west and ‘life is like a box of chocolates’, I hope it will, at the very least, be fun for Lovelock and Starkwell.  They don’t often get to watch movies starring Oscar winners and John McClane with a mustache.

[We are introduced to Meryl Streep as a hammy musical actor.  The film opens with a musical number from her failing musical.]

Lovelock: Wait, Glenn Close is in this movie?

Anyways, no one in the audience seems to be impressed with the play, except for Bruce Willis, who, armed with an almost-mullet and horrible mustache, cheers wildly.  He plays nerdy plastic surgeon Ernest.  Most everyone else has walked out.  Ernest and his fiancée Helen, played by Goldie Hawn, go backstage to meet Madeline (Meryl Streep), the washed up actress.

Starkwell: Well that was… quick?

[Flash forward seven years.  Helen is a fat depressed cat lady with a shitload of cats, and she sits around watching TV and eating tubs of ice cream.]

Lovelock: I’m sorry, but Bruce Willis with a mustache is just not worth it.

[She is CLEARLY obsessed with murdering Madeline, and gets evicted from her apartment and committed to the ol' loony bin.]

Lovelock: What in the…

[Wait… Ernest is no longer a plastic surgeon… instead he is a mortician?]

[Madeline sees Helen, looking all thin and beautiful, and says it has been “12 long years”… except that we know it has been 14.  Which is weird.]

After being rejected by her young loverboy (I assume she cheats on Ernest a lot), Madeline goes to the super secret castle / laboratory that the eurotrash secret spa owner told her about (?).  Meanwhile Helen goes over to Ernest’s house to almost bang him and plan Madeline’s murder with him.

Lovelock: I would like it if death become her a little quicker.

Lovelock: In fact, let's have some death all around.  Please. Now.

[Ernest forgoes the plan laid out with Helen, but instead, throws Madeline down the stairs.]

[Madeline gets up, all mangled like a pretzel, with her head backwards.]

They go to the doctor’s office, and it is quite apparent that Madeline is dead, as she feels no pain.  But since she is walking around, she is UNDEAD.  Lovelock and Starkwell rejoice.

Lovelock: Why is she wearing sunglasses at night?

Lovelock: She probably thinks "if I can't see them, they can't see me"... like an infant would think.

Eventually Helen finds her way back to Ernest’s house and Madeline shoots her with a shotgun, but she ALSO GETS UP.  In what is probably the best line in the movie, Bruce Willis yells out “IT’S ANOTHER MIRACLE.”  It doesn’t sound that funny out of context, but Lovelock and Starkwell replayed it several times.   The movie has been quite boring, I should add.

[Helen took the same potion, as it turns out.]

Starkwell: So… they both knew about the super secret castle thing?

Lovelock: Well, it is a movie.

[Madeline and Helen fight for like a minute, but then they make up and are best friends forever.]

Lovelock: So that’s it?

[They force Ernest to make them look beautiful again.]

[They bring Ernest to the super castle where they try to give him the potion… he decides not to.]

Starkwell: Watching everyone you love die, eternal loneliness… he makes some solid points.

Starkwell: Let me stop you right there.

37 years later, Ernest died.  He went on to do a whole bunch of amazing things and then the movie basically says the only way to live forever is to live on in the people that you love.  Ain't that sweet?  Then Meryl Streep and Goldie Hawn show up, fall down a flight of stairs and shatter into a bunch of pieces. So… lesson learned?  There are a lot of holes in this movie.  They cover up most of them by 'flashing forward' a number of years.  You don't need to explain HOW Madeline found success again, you can just say 'seven years later' and let the audience make up the rest?  What is this, a 'choose your own' adventure book?  Lazy.  As a short film, this movie would have worked.  There just ain't enough meat in there for a full length, in my opinion.  Starkwell agrees.   Lovelock doesn't care.
Documented by Kev D. and Posted at 08:00