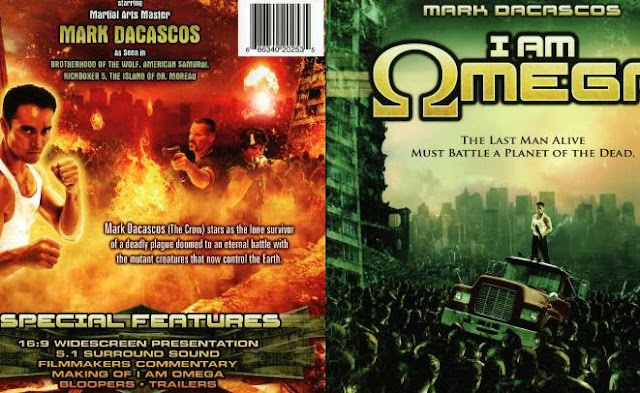 There are a handful of mockbuster production companies out there, but arguably the current king is ‘The Asylum’.  “Da Vinci Code” becomes “Da Vinci Treasure”, “Tranformers” turn “Transmorphers”, hell even “Battle: Los Angeles” becomes “Battle of Los Angeles”.  The whole point is to trick the casual movie renter into thinking that they are renting the ACTUAL blockbuster, when in fact, they are getting the mockbuster.   I know a few people that ended up with the wrong ‘Sherlock Holmes’.  Netflix doesn’t help much.  So here is “I Am Omega”, their take on “I Am Legend” with a dash of the Heston adaptation of Matheson’s book “Omega Man” thrown in for good measure.  Get ready for the shit show boys.
[...]
[Dream sequence flashback of an ugly kid with a Mop Top witnessing his mom die a zombie death and then being grabbed… it is unclear if the child is his own, or if it is him as a child.  A later flashback shows that it was his son.]
Lovelock: Oh thank goodness it was just a dream… or waiiiiiit it was a flashback dream!
Starkwell: Is that the guy from “Iron Chef America”?
Lovelock: I’m starting to think he’s not really the Chairman’s Nephew.  Plus, he speaks English just fine!
Starkwell: If he had any actual cooking skills Iron Chef style, it would come in handy in a post-apocalyptic society.
Lovelock: If he’s trying too look like a bad ass, the fluffy robe and socks were a poor choice.
[...]
[Training montage.]
Starkwell: Who would fight zombies with a bo-staff and/or nunchuks?
Lovelock: Donatello and Michaelangelo?
Starkwell: What?
Lovelock: The Chairman’s Nephew?
Starkwell: Yeah… The secret ingredient is bullshit.
[...]
After the laughter died down from the Chairman’s Nephew’s pristine roundhouse air kicks, Starkwell and Lovelock got bored.  Real bored.  And no amount of guys in rubber zombie suits would be able to change that.  Every now and then it fades to black like it’s going to cut to commercials.  Lovelock says “I could go for a commercial right about now”.
[...]
Lovelock: “I Am Omega”? More like “I Am Often Out of Focus”.
Starkwell: Not bad.
Lovelock: More like “I Am Bored”?
Starkwell: Better.
Lovelock: “I Am Taking Forever to Go Anywhere”?
Starkwell: Yeah, I think that’s the one.
[...]
The film oozed onwards, and it wasn’t so bad, I suppose.  But then he meets up with this girl, and it gets worse and worse and worse.  Then there are the token ‘redneck assholes’ and it gets worse and worse and worse.  It’s definitely not a total rip-off of any of the Matheson adaptations… nor is it original or any good at all.  If ever there is such a thing as a cookie cutter post-apocalyptic zombie story starring one guy, this is it, and it sucks.
[...]
[Chairman’s Nephew whips out nunchuks.]
Lovelock: Michaelangelo is a party dude…
Starkwell: … ? …
Lovelock: PARTAAAAAAAAAAAYYYYYYYYYY!!!!!
[...]
[Chairman’s Nephew uses large pipe like bo-staff.]
Starkwell: Well I’ll be damned, he used both.
Lovelock: Donatello does machines.
[...]
The film wraps up, the city explodes, and Chairman’s Nephew gets the girl.  Hooray? Hardly.

Lovelock: A LA CUISINE!
Documented by Kev D. and Posted at 19:25