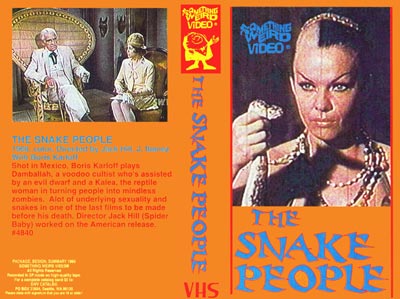 Boris Karloff stars in this film that manages to currently sneak its way into virtually every one of those zillion movies in one DVD box sets.  I kid you not, I think I have three versions of this film.  All of them are of the piss poorest quality, and feature no real menu or information about the film, except for a short synopsis, none of which seem to describe the same film.  But they all say Boris Karloff.  Starkwell, Lovelock, prepare yourselves.
[...]
[Opening shot of a map, and a guy talking about voodoo.]
Starkwell: I guess they want to establish where we are going, you know, geographically.
Lovelock: Couldn’t they have afforded a nicer map?
[...]
Lovelock: Why is it all voodoo masters wear a top hat and those weird little round sunglasses?
Starkwell: Maybe they all meet up and agree on a uniform.
[Then they really chopped the head off of a chicken and there was blood and it was kind of fucked up.]
[...]
Then the credits rolled over a still shot of what we are all assuming is Colonel Sanders, or possibly a young Orville Redenbacher, and Starkwell noticed an absurd amount of actors in this movie that have just one name, like JULISSA, SANATON, URINAL, FARFLE II, MARTINIQUE or like, you know, Cher.  Ok, some of those weren’t real.  There is a lot of randomly placed narration, here and there, assumedly because without out it, none of this would make any sense, what with the belly dancing, steel drum players and close-ups on skeleton crotches.
[...]
[Introducing Karloff, as CARL VON MOLDY.]
Starkwell: Holy shit... his pants are pulled up high.
Lovelock: Wait, Boris Karloff invented KFC?
[...]
[Von Moldy tries to move a mirror with his mind.]
Lovelock: So “Snake People” invented the force?
Starkwell: I don’t see the connection, really…
Lovelock: I’ll tell you what, Karloff is too old, too old to begin the training.
[...]
[Main Character Vincent McOpenshirt is tranquilized.]
Lovelock: That’s why I never hang around caves full of crazy voodoo people.
Starkwell: Yeah that’s why.
[...]
With little to no character development, no clear hero, no clear bad guy, no real story, and no real reason to want to continue watching, Starkwell and Lovelock were struggling.  I think the highlight for them was when, as Starkwell said, “the girl finally took that stupid hat off.”  There was a pretty good laugh in the room when Lovelock said to the main character “Hey dude, you missed a button or two there.”
[...]
[Mini Baron Samedi watches Snake Lady violate Hat Girl with a snake, presumably into her crotchal area.]
Starkwell: Well, at least they didn’t actually show it.
Lovelock: I’m not sure that the out of focus close-ups of weird Mini Samedi’s face are any better.
Starkwell: Yeah... it’s better.
[...]
[Lesbian kiss, involving Hat Girl, some sort of vision of herself and a snake.]
Lovelock: It was all just… a dream?
Starkwell: I wish me watching this was just a dream.
Lovelock: If it was, I’d be pretty pissed off at my subconscious.
[...]
Starkwell, Lovelock and me all left the room then, and came back ten minutes later, to some kind of weird bar makeout scene.  And then these zombie girls ate a guy.  While it was a welcome addition to the film, as Starkwell noted, “It seems a bit out of place.”  The insane close-up of a guy furiously playing the cowbell, on the other hand, was perfectly at home in this completely incomprehensible film.
[...]
[Scarf Guy tries to get sexy with yet another zombie girl, and Snake Lady turns her to dust, with her eyes.]
Lovelock: Why couldn’t the movie just be ninety minutes of that?
Starkwell: Why couldn't the move just be over already?
Lovelock: Good point.  Want to rewind and watch that scene again?
Starkwell: No.  No, times a zillion.
[...]
And then, in perhaps the biggest twist of the whole move, Vincent McOpenshirt was actually wearing a closed shirt, and was covering his entire chest.
[...]
Lovelock: There should be a version of this movie that just shows Snake Lady melting the zombie with her eyes, followed by Scarf Guy being eaten, and then Von Moldy being set on fire.
Starkwell: A bit short for a director’s cut.
Lovelock: It’s more like an audience cut.
Starkwell: You could cut out Vincent McOpenshirt altogether.
Lovelock: I might keep some of the belly dancing, just for the opening and closing credits.  You know, to set the mood.
Starkwell: I’m in the mood to stop watching this.  Wait... how do you know Von Moldy will be set on fire?
Lovelock: Dare to dream I guess.
[...]
Moments later the film ended.  Nothing really made any sense, but the important thing is that when the Mexican General fell into the fire, he exploded everyone into oblivion.  Except Hat Girl and McOpenShirt, who were somehow already outside of the cave.  And roll credits, and goodbye.
Documented by Kev D. and Posted at 15:55