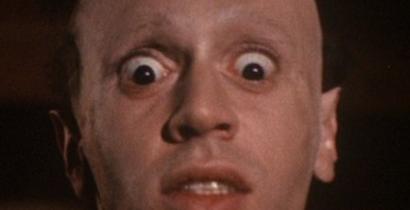 Writer-Director Jeff Lieberman put out a few films over the years, one of which was the often overlooked 1973 film “Blue Sunshine”.  Although not traditionally considered a zombie film, I stick this one into the underrated ‘zombieless zombie movie’ category, with movies like Romero’s “The Crazies” or Rollin’s “Les Raisins de la Mort”.  As I hit play on the DVD, it opens with a message from the British Board of Film Censors, telling us that this picture is rated ‘X’.  Hopefully for EXTREME.
[...]
[Wendy sees her ex husband on TV.]
Lovelock: That’s why I never date public figures.
Starkwell: Yeah, that’s why.
Lovelock: Oh snap, her hair is falling out!
[...]
[Creepy husband stares down wife, parrot lands on his shoulder.]
Starkwell: And… cut to shot of the moon?
Lovelock: Starkwell, I’m scared.
[...]
[Dude sings at party. Someone rips off the wig that he was apparently wearing.]
Starkwell: The eye close-ups are terrifying.
Lovelock: All his hair falls off, he goes running into the woods, and no one wants to go looking for him?  With friends like these who needs friends.
[Baldy Crazy beats up the girls and sets one on fire and throws her into the fireplace.]
Lovelock: …
Starkwell: … with friends like that who needs friends indeed.
[...]
As the main character gets framed for the murders, Starkwell is already praising the acting, the writing, the directing, the soundtrack… the whole damn thing.  Lovelock told him to shut up and watch.
[...]
[Wendy finds a shitload of hair in her drain.]
Starkwell: GROSS!
Lovelock: SHE’S TURNING!!!!!!!!!!!1111!!!!!!!!!!!!!!!!!!!!
[...]
Main character Zipkin goes all Nancy Drew / Psychic / AWESOME trying to get to the bottom of this whole bald crazy people thing.  Starkwell and Lovelock were pretty much quietly playing air guitar while watching.  As the story continued to unfold, an Zipkin tried to find the meaning of “Blue Sunshine”, they decided that if they started a band, it would be called “Blue Sunshine”.
[...]
[Car chase, Zipkin drives a Bronco up an insanely steep hill.]
Lovelock: That hill was like ninety degrees.
Starkwell: How the hell did they do that?
Lovelock: That's why I drive a Bronco.
Starkwell: Yeah, that's why.  Wait.  You don't drive a Bronco.
Lovelock: Not that you know about.
[...]
Zipkin figured out that 'Blue Sunshine' was the name of some acid that all the bald crazies took ten years before when they all went to Stanford together and is now turning them into homicidal maniacs and Starkwell and Lovelock’s minds exploded.  Full exploded.  Kaboom.
[...]
[Bald Crazy beats up people on the dance floor.]
Lovelock: That’s why I never go to dance clubs.
Starkwell: Yeah, that’s why.
Lovelock: Well that and because one time they didn't let me in with cargo pants on.
[...]
[Zipkin chases crazy Baldy through a department store.]
Lovelock: All the mannequins are bald! He’s screwed.
Starkwell: This movie is genius.
[...]
The movie ends with some info flashed on the screen that makes it seem like this was all true.  Before Starkwell had time to explain to Lovelock that this was just part of the film, Lovelock promptly shit his pants.  Fantastic film.
Documented by Kev D. and Posted at 09:00