Flight of the Living Dead. 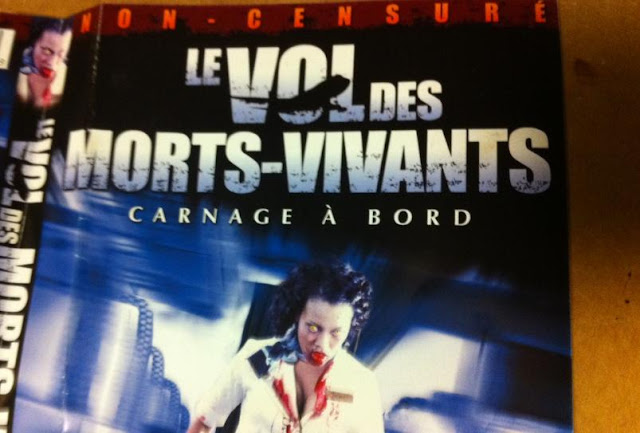 Some movies are obviously made to try and cash in on growing trends and make a quick buck.  Think of all the vampire caca currently coming out of the woodwork.  Well somewhere midway through the last decade, the popularity of the zombie took off (and is currently cruising around a million feet, for better or for worse).  Well, this “Flight” film actually tried to cash in on two trends at the time.  The increase in zombie interest and the smash unexpected success of a movie about snakes on a plane, called, well, “Snakes on a Plane.”  “Outbreak on a Plane”?  For Pete’s sake… Thankfully this plane trend never really took off otherwise we’d have werewolves on a plane, maybe witches on a plane, and especially right now, vampires on a plane.  Although I’m not quite sure how they would protect themselves from the sun.  I should mention that this was another DVD I got at a bargain bin place in Quebec, so, it’s badly dubbed in French, with no English audio option.

[Three flight attendants talk about partying and like, dudes.]

Starkwell: What airline would have three flight attendants that look that good?

Lovelock: Airlines in a film.

[Some sort of military guy in HASMAT gear watches a bin of some kind.]

Starkwell: What airline would have military experiments on board a regular passenger flight?

Lovelock: Airlines in this film.

The film seems to have a decent budget with semi-recognizable faces.  But Starkwell is having a lot of trouble getting past the incredibly predictable passenger list.  I believe at one point he said “of course there’s a convict handcuffed to a US Marshal.”  Lovelock shouted “that dude was in ‘No Escape’!”  Then they stopped watching for a while because they started talking about “Con Air” for some reason and imitating Cage’s HORRENDOUS southern accent from said film.

[Tiger Woods guy is in first class, wife complains about hearing about golf.]

Starkwell: If she doesn’t want to hear about golf, why would she marry a pro golfer.

Lovelock: Man, I can’t wait for her to be dead.

Starkwell: How did he get that golf club through security?

[Still no zombies since that first one.]

Lovelock: I take back what I said… they are wasting a lot of time.

Starkwell: Yeah, I definitely feel like I’m wasting my time.

Lovelock: Hey, at least they are trying to make it about the characters…

Starkwell: Too bad the characters all suck.

The zombie action eventually picked up, and all the characters that we hate the most seem to die first.  So, at least the film does that right.

Lovelock: As long as they’re going to cast a pilot that looks exactly like the pilot from “Airplane!” couldn’t they have made him have funny dialogue?

Starkwell: I can tell you that I don’t like this movie.

[Survivors make a bomb and explode the zombie nest.]

Starkwell: First of all, why would the zombies nest like that?  Second, how can you explode the inside of the plane and still be flying?  Third, who is flying the plane, since both pilots are dead?

Lovelock: I’m pretty sure the movie was written by drunken teenagers.  On napkins.

Starkwell: All I know is that I wish real planes were as durable as this one.  They just shot a missile at it, and it’s still kicking.  And yeah, of course the convict knows how to fly and land the plane, in the desert, on fire.

Lovelock: That’s like the first thing they teach you in prison.

This is cookie cutter zombie fare at its cookie cutterest.  Except, you know, on a plane.  The movie ended and Starkwell and Lovelock were all like [...] “what a pile of shit” [...]  "totally" [...].  I won’t lie, the bad dubbing enhances the viewing experience, but even this unintentional uniqueness can’t elevate this movie above the realm of predictability and stupidity wherein it lies.  Still… good for a laugh.  Salut.  A la prochaine.
Documented by Kev D. and Posted at 20:15