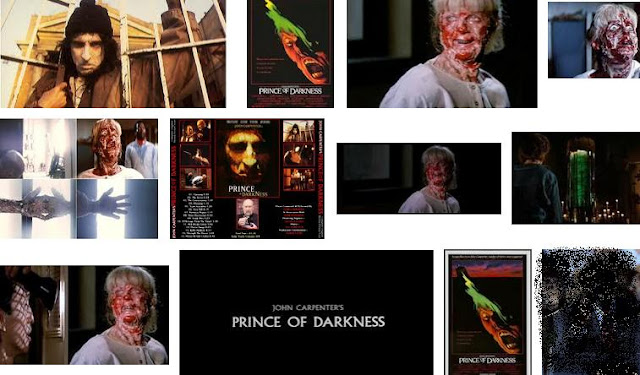 No one can deny that Carpenter is a master of the horror genre.  As much as I don’t appreciate all of his work (specifically some of his more recent ventures), you would be hard pressed to find anyone that isn’t at least somewhat scared by his earlier stuff.  1987’s “Prince of Darkness”, to me, is one of his more underrated pictures along with the Roddy Piper fuelled “They Live”.  After leaving half way through “Ghost of Mars”, Starkwell is pumped to see something else by the legendary director.  Lovelock just wants to see some action.
[...]
[Professor gives lecture.]
Starkwell: I realize that it’s probably a graduate level course, but those are some fairly old looking students.
Lovelock: If you can grow a moustache like that, the only class you should be in, is one that you are teaching, preferably on ‘How to Grow an Awesome Moustache’.
[...]
The story was slow moving, but very creepy.  Sometime after the Professor rounded up his best old students, he told them they were going somewhere secret to study something that he can’t tell them about yet. I think Lovelock yelled out “FIELD TRIP.”  After Moustache Brian seduces Red Head, he re-iterated “Field trip… with sexy complications.”
[...]
[Zombie Homeless dude kills Miscellaneous Nerd #3.]
Lovelock: That’s why I don’t go near homeless people in back alleys.
Starkwell: Yeah that’s why.
[...]
[Canister shoots slime directly into girl’s mouth.]
Lovelock: That’s why I keep my mouth closed when I stare up at a mystery evil slime.
Starkwell: Yeah that’s why.
[...]
After the slimy facial, things got even creepier.  Starkwell kept mentioning how the minimalist score made the atmosphere even more tense and horrifying.  Lovelock kept saying “you’re tense and horrifying.”  At one point a character called the priest “looney tunes” and said “this is caca” and became Lovelock’s favorite character ever.  Then he died almost immediately.  Lovelock was still totally pumped.
[...]
[Possessed Girl climbs on top of Asian Girl in her bed, then pukes in Asian Girl’s mouth.]
Lovelock: Worst slumber party ever.
[...]
[Possessed Girl climbs on top of Black Guy while Asian Girl holds him down.  She pukes in his mouth.]
Lovelock: Worst threesome ever.
[...]
In perhaps the worst escape attempt ever, Moustache Brian climbs out the window and into the alley, and then immediately climbs back into the window as Homeless Zombies close in on him in the alley.  Lovelock started to crack a joke, but then the Decomposing Blondie, pregnant with some kind of evil, makes icky slime noises as her skin melts and Lovelock pukes mid wisecrack.
[...]
[Possessed Decomposing Blondie picks up make up mirror.]
Lovelock: I don’t think make up is going to help at this point.
[...]
The movie wraps itself up, and the ending is scary, satisfying, depressing, yet hopeful.  Starkwell stood up and applauded.  Lovelock stood up to go change his underwear, and break all of the mirrors in the apartment.  Job well done, Mr. Carpenter.
Documented by Kev D. and Posted at 10:15