Bong of the Dead. 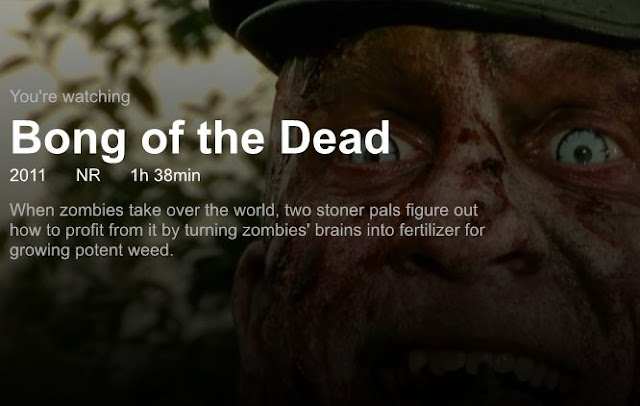 At this point, when a “film” is actually called “Bong of the Dead”, I’m not even sure why I’m bothering to show it to Lovelock and Starkwell.  I know how this is going to end.  But my unwillingness to judge a book by its cover, and my ABSOLUTE willingness to torture Starkwell and Lovelock, allows me to believe that this is a good movie to force them to watch.

Starkwell: Wouldn’t the explosion be a little bigger, given that the meteor was that big?

Starkwell: Not a bad joke, but there’s bound to be a better time to use it.  I suspect you thought of it when you heard the title, and were just too excited to hold it in... Weak.

Lovelock: Hey, how about that bad overdubbing?  More like “Wrong of the Dead”. Eh?

Then the old man bites his wife, and then the husband and wife sit on the couch, watching T.V. eating each others’ intestines.  A pretty decent start to a film, honestly, although the opening credits made Lovelock “want to punch something in the face lots.”  The director was obviously going for a comic book sort of a thing.  Did not work for Lovelock.  REALLY did not work for Starkwell.

Starkwell: Are we supposed to think they’re cool… or… ?

Lovelock: More like “Wrong of the Dead”, am I right?

Starkwell: Better, I guess.  But… still not there.

It’s pretty clear that the stoner guys are supposed to be “stupid”.  Ironically, stoned people would probably watch this and laugh.  Anyways, there’s this whole scene where the stoners use ground up zombie ooze brains to grow miracle weed in a matter of seconds.  It seems like they may be the only survivors?  Then there was a getting stoned montage, and EVENTUALLY the stoner dudes decide they need to go on a zombie killing mission, in order to get more weed fertilizer.  Starkwell leaves.

Lovelock: How much of this movie is going to be two dudes acting stoned to a shitty soundtrack?  Lots of it?  Oh, ok just checking.

There was a fairly gross eye gauging sequence, that was enough to make Lovelock crack a little smile… but it takes more than fun gore to win him over.

[They meet the King Zombie.]

Lovelock: His name is Alex Montgomery the... Third?  That’s a bullshit name.

Lovelock: Wait… is he the leader or… WHAT THE FUCK.

Shit makes no sense.  The overdubbing gets even worse as the movie goes forward.  They meet up with a girl.  She's all sexy and shit.  The girl character’s overdubbing is HORRENDOUS.  Lovelock said the movie was somehow managing to give him heartburn.  Then he said “fast forward, dude… I think I’m having a heart attack.”

Lovelock: Obviously they get drunk, stoned and half naked.  MORE LIKE WRONG OF THE DEAD.  Seriously, fuck you.

The girl was using a zombie on a treadmill to power her shower.  One decent idea hidden in a mountain of poopoo film making.  And now it becomes obvious that it was only done in order to show the girl naked..

[THEY MAKE FUN OF CANADIANS.]

Lovelock: Now THAT is “Wrong of the Dead”.

In an obvious nod to “Dead Alive”, they’ve equipped lawnmowers to the front of their car and proceed to mow down zombies.  Lovelock says he’s going to be sick.  Not from the gore, but from the mis-use of Peter Jackson’s magic.  Anyways, the girl, let's call her Tiny Shorts McTitsAndAss and the one surviving stoner guy chop up all the bodies and fertilize the ground, I guess to grow a bunch of weed.  With ten minutes of running time left, they get naked and go take a shower together and terrible funky music plays.  We see lots of naked kissing.  Also there’s a zombie smoking a joint.  Roll credits… for ten minutes?

Lovelock: In conclusion, “Wrong of the Dead”.

So, the film explained NOTHING.  Why was there a King Zombie, what caused it, who the fuck is Alex Montgomery Snickens the Third?  Seriously, "what the fuck" times a million?  And then, I shit you not, they set it up for a sequel featuring a cyborg Zombie King.  I wish I was making this up.  A sequel.  I think they’ve been smoking too much of their inspiration.

As bad as they thought it would be given the title, it was worse.  Pure turd.
Documented by Kev D. and Posted at 20:55