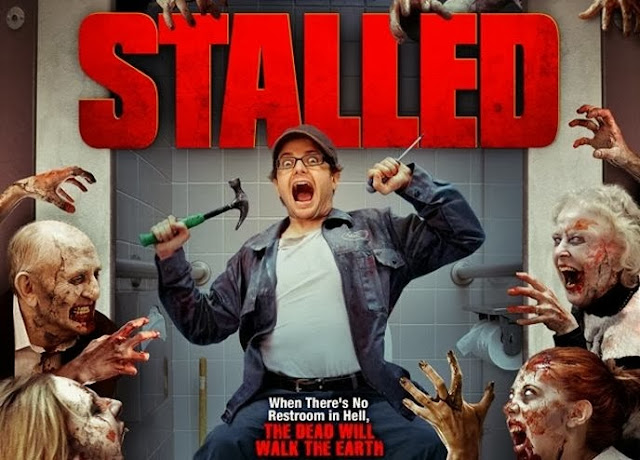 This is probably the fourteen hundredth zombie film to come out this year.  The box promises that the film is a “worthy successor to ‘Shaun of the Dead’”.  I find that hard to believe.  A lo-budget UK film apparently centered on a janitor fighting for his life at an office Christmas party while the zombie apocalypse begins in full swing.  At the very least there is potential for some good office humor.

[Maintenance Guy enters bathroom to fix stuff, he goes to fix the speaker in the ceiling, a rat falls out and hits him in the face.]

Starkwell: Maintenance Guy is kind of a Jack of all trades.

Lovelock: That’s likely to come in handy when all of dem zombies come gunning for his yummy guts.

[Janitor, after handling the dead rat, pukes in the TOILETTE.]

Then two girls dressed in bikinis (for some reason) enter the bathroom, and rather than spying on them, Maintenance Guy starts playing poker on his phone and falls asleep.  He wakes up when they start kissing and undressing and decides to spy on them after all.  “Fair enough”, said Lovelock.  The movie keeps it light, in that they don’t show boobies and whatnot.

[Other office dudes barges in, all zombie.]

Starkwell: Well, at least they didn’t waste any time.

[Maintenance Guy gets stuck in a bathroom stall, armed with a screwdriver, with bunch of zombies outside the stall, and the title shot shows… STALLED.]

The jokes, so far, are fairly juvenile and ‘silly’, but they’re done with enough flare, so far, that it still works.  And, so far, both Lovelock and Starkwell really dig the main Maintenance Guy. Then it turns out there’s a girl in the stall two stalls over from Maintenance Guy.

[Jeff from IT barges in, armed with a fire extinguisher, and plans on saving them and getting the girl.  Maintenance Guy shoots a severed finger down Jeff’s throat, Jeff chokes, Jeff gets eaten.]

Maintenance Guy has drawn a picture of the girl he can’t see on the stall wall and is basically having a conversation with his own drawing.  The whole thing is playing out in one small location, with only one or two characters, and it makes the whole thing feel a lot like a play.

Lovelock: I’d go see this play, if it was a play.

Starkwell: You know you’d have to put pants on…

[Every time the girl talks, they focus on the drawing.]

Lovelock: That’s getting a bit weird.

[Maintenance Guy recovers his toolbox, it is full of money, then the girl throws him a pill, that he takes, and gets MEGA HIGH.]

[Transitions into a whole dance scene with the zombies.]

Lovelock: The “Thriller” dance joke, never fucking works.  NEVER.  I wish everyone would stop doing it.

As the deep, heart-to-heart, conversation continues between Maintenance Guy and the drawing on the wall, Lovelock bails on the film.  Starkwell is surprised, but nonetheless, plans on seeing it through until the end.

[While trying to get his hammer from one of the zombies, Maintenance Guy gets bitten.]

Starkwell: They’re really taking this in a sad sack direction…

[Zombie had dentures, so the bite didn’t count.]

Starkwell: Well alright then, it’s been done before, but at least there’s still hope for Maintenance Guy.

Then Maintenance Guy breaks into the crawl space behind the wall and makes his way to the girl, who, as it turns out, is not the “hot” girl he thought she was, but actually the “fat” girl she said she wasn't.  A bit of an obvious twist, but a less obvious twist is that the girl then feeds herself to the zombies while Maintenance Guy watches through a hole in the wall.  It’s totally fucked and Starkwell isn’t sure how to feel.

Starkwell: Why?  They weren’t even eating the brains… that’s just unnecessary.

Lovelock: Almost as played out as the "Thriller" dance joke.

Lovelock: I wanted to see if she was actually the fat chick.

Maintenance Guy manages to finally get out of the bathroom by wrapping himself in toilet paper, that, somehow, acts like a suit of armor (?).  All in all, it’s not a bad movie, and it is interesting that the whole things plays out in one room up until the final few minutes, but Starkwell can’t help but wish that the girl had actually made it.  I guess he’s a bit of a romantic.  The film ends with him being stuck inside a phone booth, surrounded by zombies.

Lovelock: That's why I never go to office Christmas parties.

I didn't realize that there were still phone booths anywhere in the world.  I smell a sequel… BOOTHED.
Documented by Kev D. and Posted at 11:22