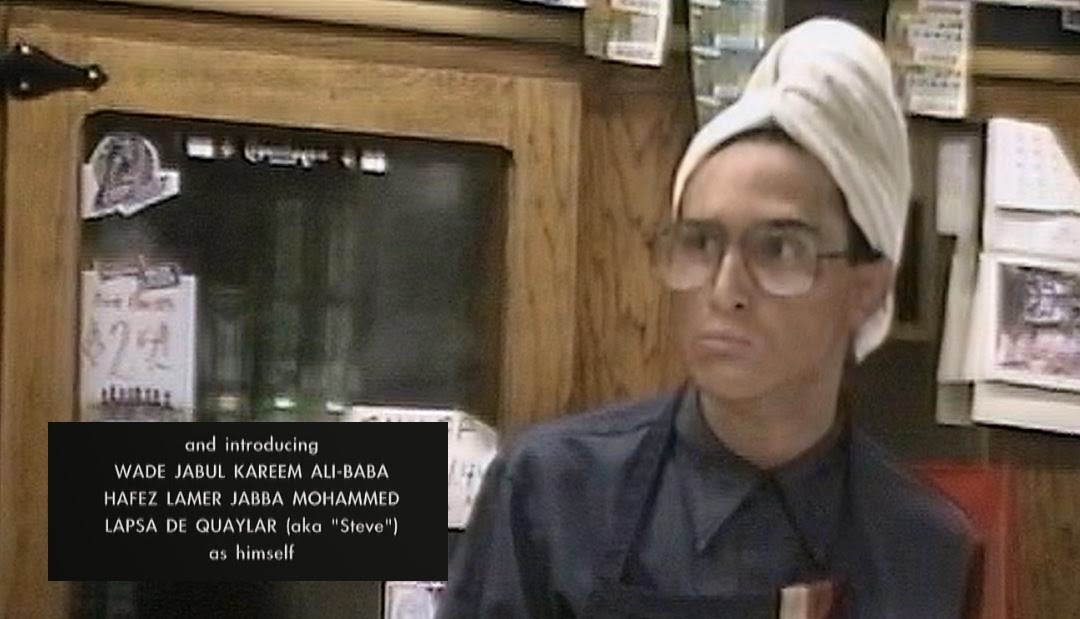 I won’t lie, I’m pretty psyched to watch this one with Lovelock and Starkwell.  J.R. Bookwalter was the man behind “Dead Next Door”, which was a pretty fantastic, while still being completely fucking terrible, backyard horror film.  Starkwell wasn’t able to get through the whole thing, while Lovelock couldn’t help but marvel at the gore and ridiculousness.  Let’s see where his follow up falls.  I should mention, let’s see where his ZOMBIE follow up falls.  Because his actual follow up to “Dead Next Door” was a movie called “Robot Ninja”, which I think we all can agree is probably amazing...ly bad.

[Definitely a shot on video film.   The intro is just squiggly lines that look like a Windows ’95 Screen Saver.]

[The director used a different name for the Director slot.  Not starting off well.]

[Some “voodoo” priest cuts his arm with some special effects that would embarrass magicians at childrens’ birthday parties.]

Lovelock: So many closeups… of teeth.

Starkwell: If every scene is as unnecessarily long as this one, we are in for some real-

Anyways, two cops show up to apprehend Voodoo Priest, and after some terrible acting, one of the cops AND the Voodoo Priest both die in a shootout.  Arguably the lamest shootout ever.

Starkwell: So the voodoo priest would have pictures of zombies that he printed out on computer paper hung on his wall?

Starkwell: And he has a subscription to Playboy?

Starkwell: The ladies must love his pad.

Anyways, then we are treated to a half decent “Zombie Cop rises out of his grave” sequence.  After some more of the shittiest acting I’ve ever seen, the basic plot is that the “Zombie Cop” wants to recruit his former partner in an attempt to stop Zombie Voodoo Priest Guy from taking over the world?

Lovelock: Those two “punks” are easily the lamest looking thugs in the history of cinema.

Starkwell walked out because the actor portraying the “INDIAN” convenience store owner was a white guy with brown paint all over his face.  With a towel on his head.  An actual towel.  It is the most racist thing I think I’ve ever seen in a movie.  I honestly wish I was joking.  Then one of the thugs called him “towelhead”.  There are also SO MANY forced horrible one-liners.  This movie is embarrassing.

Lovelock: At least “Dead Next Door” had blood and guts.

Lovelock: So the cop also has movie posters on his wall?

Lovelock: Did that guy just tell the cop to stick his badge “up the rear”?

It gets worse.  There’s another scene with the fake Indian guy.  This time they didn’t even paint his face brown.  But he does have a bunch of dialogue wherein he speaks in an insanely offensive accent.  Also, he says his name and his name is all “gibberish” and super long.  Then there’s a shot of a guy watching “Robot Ninja”.  Bookwalter gives HIMSELF a shout out.  Man, fuck J.R. Bookwalter.

Lovelock: The kids playing on that soccer field look really confused as to why there are people with camcorders filming a really shitty and slow chase between a guy in a cop outfit and a guy in a Jamaican outfit.

You know what else is bad in this movie?  The editing.  The music.  The writing.  The everything.  Just a well-rounded painful turd.   The end.  And by the way, the last scene is another scene starring racism.
Documented by Kev D. and Posted at 21:42 2 comments: