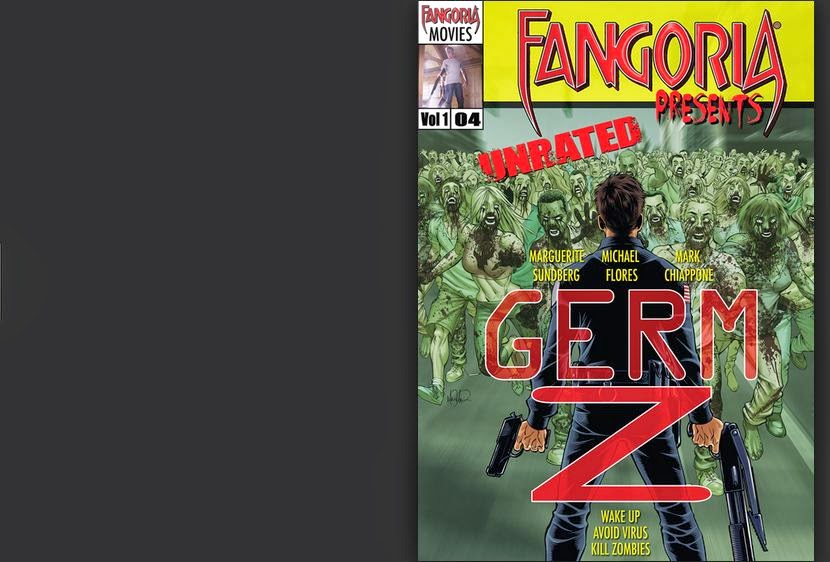 Although it appears that the film’s actual title is simply “Germ”, at some point someone decided to Asylum-ize this film and add the “Z” in order to mockbust the movie based on a book that it ended up being nothing like at all.  That being said, perhaps it was just the marketing that tried to make a mockbuster out of this.  Maybe at it heart, it was originally an original story.  Lovelock and Starkwell will certainly not take all that long to figure it out.

[Screaming dude runs after a guy with a humpback (?) and then, while screaming, his head explodes.]

Lovelock: Did his head explode or was he wearing a red water balloon hat?

Starkwell: We may be in for a short ride.  Meaning I may leave soon.

The movie has already bounced the timeline around a couple of times.  The acting is bad.  Real bad.  But it’s a low budget deal, so that can be forgiven.  Anyways, the story seems to be about a meteor bringing a space virus down to earth.  The timeline makes no sense though.  They jumped to “forty hours earlier” but then immediately went back to the present without having any reason to jump around.  So yeah the meteor crashed on Earth.  Also they’ve introduced more characters than they likely need in this movie.  There’s Deputy Guy and his Friend With Benefits that he humped in the woods, there’s her whole family, there’s a bunch of military dudes, and for whatever reason, a yoga class.  And Deputy Guy has a partner who CLEARLY is all “fat comic relief guy”.

[Friend With Benefits takes her sister to her Girl Scout campout weekend.]

Lovelock: Something needs to happen… OTHER than introducing a bajillion characters that I already don’t care about.

Then we see a volleyball game with the DOUCHIEST guy ever with a killer farmer’s tan wearing a wifebeater.  Insane.  Enough characters.  I assume the guy making it invited EVERYONE HE’S EVER KNOWN to be in his shitty movie.

[Starkwell quietly leaves, as to not wake up Lovelock.]

Nearing the half way mark through the movie, there has not been one zombie in this OUTBREAK movie.  The cover shows a guy in a city armed with all sorts of weapons surrounded by the infected.  All we have is one guy who has been eaten, but it wasn’t shown.  A deputy who has no balls and DEFINITELY no cool guns, and, oh yeah, it’s not in a city, but rather, in a small like town.  The second half of the film picks up a bit, and at least has some action (some), but all in all, this is a dud, and I can see why Starkwell bailed and Lovelock fell asleep.  What was the head exploding at the beginning?  What in the fuck?  Slow-moving, and pointlessly dragged out… five or ten minutes worth of bad story stretched out to eighty-five boring horrible minutes I can't get back.  Ouch.
Documented by Kev D. and Posted at 08:15 No comments: 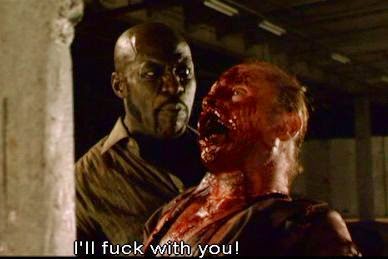 The later part of last decade was when the whole zombie film thing was really hitting the saturation point.  After the success of “Zombieland” it seemed like everyone was putting out some kind of zombie movie.  It’s only gotten worse now in the wake of the hit TV show based around the ol’ zombie apocalypse.  Anyways, back in 2009, the French got in on the action with a rather cookie cutter action packed zombie bonanza extravaganza, about cops and robbers and, of course, zombies.  At best it will play out like if Luc Besson made a zombie movie, and at worst, it will be exactly what we expect it to be.

[People at a funeral, ALL INTENSE.  Some dude plans on going after the dudes that killed his… miscellaneous relative /  friend (?)… so they go and attack a whole apartment building.]

Lovelock: Wait, the bad guy gangsters have a whole building?

Starkwell: I guess they’re squatting in an abandoned building.

Lovelock: looks like it totally sucks.  And not for the usual reasons.

So the rag-tag gang charge the group of drug dealers to get their friend back, and two of them are shot immediately.  Wait, I just realized that the rag-tag gang are actually cops.  I guess they were going vigilante style in order to kill the dudes that killed their friend, and and also rescue the hostage.  Too late, the drug lords just shot the hostage and now the “gang” are all hostages.  And the drug lords just killed another one of them.

Lovelock: They should have watched “Death Wish 3” beforehand to see how this shit is done.

The action so far has been pretty good, but it moments later EXPLODES into a frenzy of zombie when the recently deaded hostages start eating gangsters, and zombies start charging the building.  The zombies are definitely more rabid than slow and lumbering, and take a bit from “Demons” to be completely honest.

[Weak ass gangster dude jumps on zombie’s back and hits him.]

Lovelock: Dude hits like my grandmother.  They just shot the thing thirty times and it’s still up and about and he thinks his limp-wristed whacks are going to… ?

[Head Gangster figures out to go head shot styles, with a shotgun.]

The cops and the gangsters decide to WORK TOGETHER, to try to get out of the building.  BEST FRIENDS.

Lovelock: Where was that before?  I don’t know, movie, you’re being a touch inconsistent.

The movie trucks along.  There is a fair amount of action, and the dialogue is alright.  The problem?  The characters are ALL scumbags.  Even the cops are shitty cops and shitty people.  Hard to have a ton of fun when you’re not really rooting for anyone.

Lovelock: So I can root for shitty cops, evil drug dealers or this crazy racist old man that they just met?

A few twist and turns later, many more zombie kills and a bunch of dudes being eaten, head cop  finds himself at ground level, standing on a car surrounded by zombies, spinning around, with guns blazing like he’s in the Matrix.  Then he runs out of bullets and gets eaten.  Which leaves us with Crazy Old Racist, Head Gangster, and the Girl That Everyone Hates Because She’s A Mega Bitch.

Lovelock: Honestly, I really hope no one makes it.

Starkwell: That makes two of us.

Head Gangster and Bitch make it out alive and BITCH SHOOTS HIM IN THE HEAD.  The end.  Roll credits.  It’s the fucking worst.  The worst character makes it. The worst.
Documented by Kev D. and Posted at 08:10 6 comments: