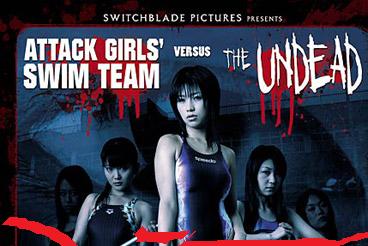 In an effort to keep Starkwell and Lovelock on their toes, I have decided to challenge them with what promises to be a ridiculously awful film, Japan’s 2007 entry “Attack Girls Swim Team vs. The Undead”.  I think the title tells us what sort of crap they are in for.
[...]
[Girl swimming in pool, feels a presence, like a zombie or something.]
Lovelock: Surprisingly, she seems to swim competently.
Starkwell: Considering how early we still are in this movie, there have been an alarmingly large number of upskirt shots, and close-ups on schoolgirls in bathing suits.
[...]
[Coach beats on girls.]
Starkwell: Thanks heavens my swim coach never walked around in a speedo like that.
Lovelock: Or beat on me.
[...]
Somewhere in between all the boobies and bumbums and girls walking around everywhere in bathing suits, most of the school starts simultaneously turning into ultra violent zombies.  There’s a lot of blood and flying body parts, but as Starkwell said, it looks like everything “could have come from Spencers Gifts”.  Nonetheless, Lovelock admitted that he was “grossed out”.  But that could have been because he was eating Greek yogurt at the time.
[...]
[Professor Zombie juggles, spits fire, does acrobatics, throws ninja stars.]
Starkwell: Why would a high school teacher be able to do all those circus tricks?
Lovelock: In Japan, the teachers are often trained in the circus arts.
Starkwell: You have no idea what you’re talking about, do you?
Lovelock: No, none.  But I bet I had you for a second.
Starkwell: You had me for exactly no seconds.
[...]
[Training montage of Ultra Booby Girl.]
Starkwell: This is quite possibly the worst montage that I have ever seen.  WORST PUSHUPS EVER.
Lovelock: It’s hard with those enormous implants weighing her down.
[...]
[Girls strip to compare birthmarks.]
Starkwell: How convenient that the marks are on the boob.
Lovelock: She probably paid a lot for them knockers.  She probably wants to show them off.  Awww… Isn’t that adorable.  Now they’re kissing each other near the birthmark.
[Starkwell abruptly leaves during the hardcore lesbian scene.]
Lovelock: Euuuuuuhhh… call me when it gets good.
[Lovelock also leaves when he becomes increasingly uncomfortable.]
[...]
You know what? I never called him back into the room.   I almost called him back in to laugh at the fact that after the lesbian love scene, one of the two girls randomly had a classical guitar, in the kitchen, and started to play it.  But no, this movie is a real piece of shit, and it only got worse after they left, full of nonsensical plot devices, twists, turns, flutes with supersex powers and, of course, vagina lasers.  As a swimmer, I’m offended.  As a zombie film enthusiast, I’m simply horrified.
[...]
Lovelock: I need to get me one of them flutes.
Documented by Kev D. and Posted at 10:15