Horror Rises From The Tomb. 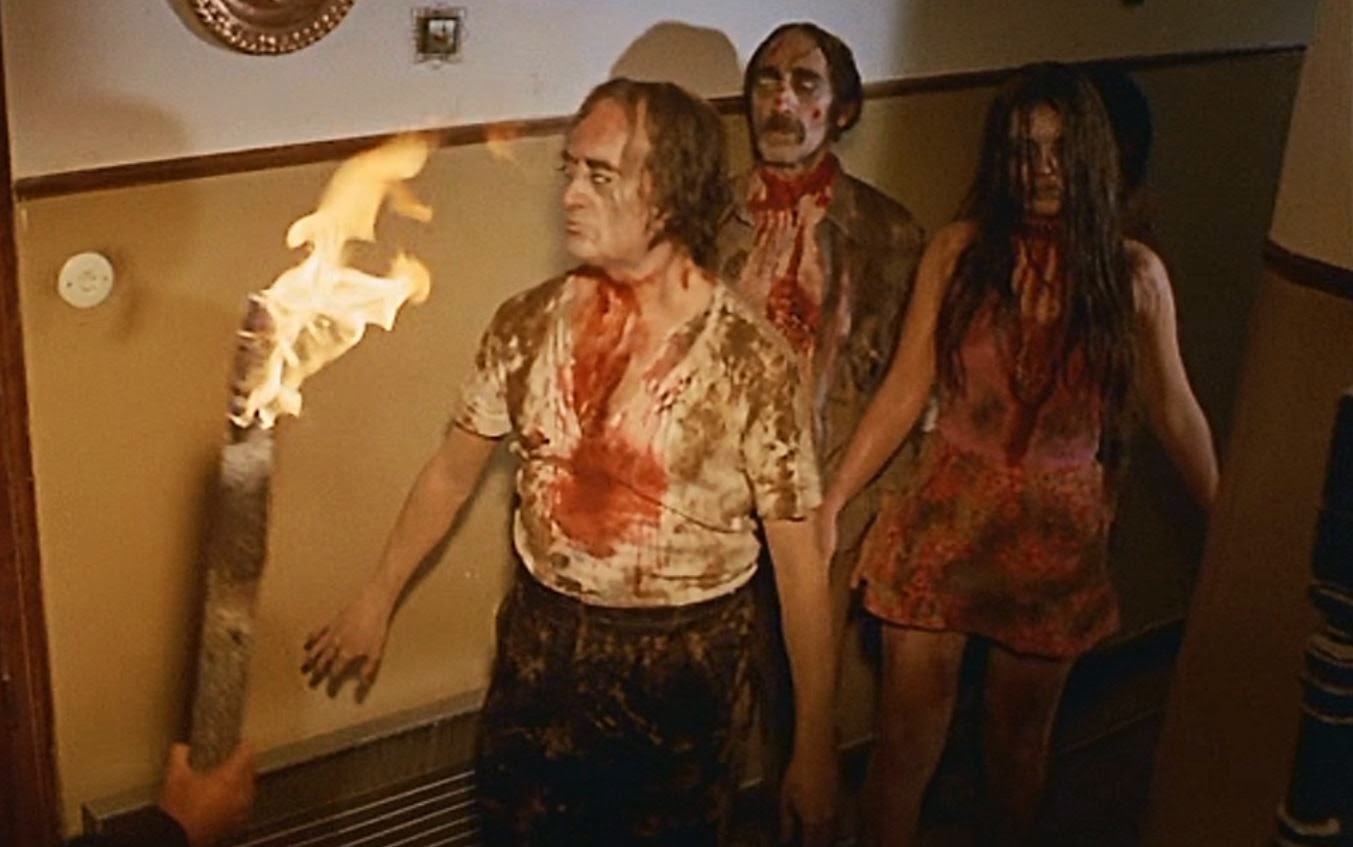 “Vengeance of the Zombies” was a film released the same year as what we are about to watch.  “Vengeance” was also written by, and starring, PAUL NASCHY.  “Vengeance” was a buttload of stupid fun.  So, in conclusion, this should be fantastic.  Gentleman, start your engines.  NASCHY!

[DVD goes PLAY MOVIE and we are treated to a NASCHY introduction to the movie, wherein he is holding an axe.]

Lovelock: Do we even need to watch this?  I feel like it won’t live up to how awesome it already is in my mind.

Starkwell: It definitely will not live up to that.

As is always the case with these Spanish films, the costumes are out of control awesome.  Naschy is wearing a bad ass cape, and appears to be some sort of vampire, in the olden times.  He is about to be decapitated, along with his insanely hot woman who is, obviously, nearly showing all of her boobies in her insane dress.

[Naschy is beheaded, and his woman is hung naked, obviously, upside down and is bled to death.]

Starkwell: The Spaniards certainly like to cut into a naked bare boob.

Lovelock: Meanwhile the scar faced knight watching all of this happen… ALSO PLAYED BY NASCHY.

Lovelock:  I was gonna go the Martin Lawrence route.

Starkwell: Sweet beheading, by the way.

[Cut to the present day (1973), and a dashing, cleaned up, suit-wearing Naschy is in an artist’s apartment watching him paint.]

Lovelock: Seven minutes into the film and he has already played THREE characters.

Starkwell: I think that might actually be the same character as the beginning, I think he’s immortal.

Lovelock: Or… BACK FROM THE DEAD.  Whoomp.  There it is.

Then there’s a really cheesy scene where the characters all go to a séance, and the old lady medium talks to Dead Naschy from the past.  There are just so many Naschys at this point, it is quite hard to keep up.  Then the Painter finishes his painting, and it turns out he has painted a headless Naschy holding his head (strangely he doesn't seem to think, hey that looks a lot like my friend).  Then he sees a floating Naschy head above his painting, bleeding and laughing at him.

Lovelock: Which Naschy is which?  Why did they make him play the knight too?

[Naschy fights off some car jackers.]

Starkwell: So, wait, the gang is going to the old Naschy castle where the original Vampire Naschy was killed and buried?

Ok, so I guess they are digging around the property looking for treasure.  I can only assume that they’ll find NASCHY HEAD.

[So one of the gardeners opens the treasure chest they found and whatever he sees possesses him, and he turns around and kills some dudes.]

Lovelock:  Totally where “Pulp Fiction” got all of its ideas.

[Painter hooks up with his now possessed blonde idiot girlfriend, and now he is possessed.  He goes after Naschy’s woman.]

Lovelock: She’s probably better off dead than with Naschy.

[Meanwhile Naschy goes back to the other woman… probably for a round two.]

Starkwell:  Wow.  Tells his woman to keep cooking, then goes off to bone the young girl.

Lovelock: After throwing dead bodies in a lake.

[We finally see Naschy’s undead head in the treasure chest.]

The possessed gang go on to put Naschy’s head back onto his body, and he gets up and WALKS.  Next, the plan seems to be to shove his woman’s spirit into the Current Naschy’s woman.

[They put Current Woman into the coffin that the old skeleton of Vampire Naschy’s original woman is in…  But first they obviously need to cut off all of her clothes and grope her while showing full bush.]

Naschy grabs another feel or two of dem boobies before he stabs her.  Then, with a hand full of bloodnad her boobies, he fondles her some more.  Next thing you know Original Naschy woman is back!  Current Naschy Woman has vanished.

[The possessed gang is to become food for the undead.]

Undead Woman goes into town naked and walks into a random dude’s room and seduces him and kills him and, I guess, eats him.  But not before Boobs, Bush, and some unfortunate dude ass and balls.

[Naschy seduces a random girl in her room in the village.]

Starkwell: I could buy that if a dude turns his head and sees a naked woman, he might be like “LET’S DO THIS”… but are we to believe that a woman would see a fully clothed and caped BEARDED Naschy standing in the corner of her room, hiding behind a curtain, and would STRIP, GET ON THE BED, and begin fondling herself?

Lovelock:  Woman want him, men want to be him.

Lovelock: Either that or it was REALLY easy to get chicks In Spain in the seventies.

Starkwell: Right… it couldn’t possibly be that the dudes making this movie were perverts.

Basically Vampire Naschy has the world’s most powerful bedroom eyes.  One look and the ladies are like “do me yo-yo master”.  Then… all of the dead people emerge from the swamp and come back to the castle.

Lovelock:  Say what you will about anything else, but those are some seriously sweet looking zombies.

Starkwell: Meanwhile Naschy hasn’t even really noticed that his lady is no longer around.

Lovelock:  Because he has a new lady… DUH.

Possessed painter shoots Naschy dead.  He then tries to kill Naschy’s New Lady, but the necklace she is wearing frees him from the possession.  There’s a pretty sweet gore scene of Vampire Lady ripping a dude’s heart out.  Eventually everyone except the one girl die and she uses the necklace to kill Vampire Naschy, but not before a few more boobs are exposed and groped.

[Girl throws the necklace into the lake.]

Starkwell: Wouldn’t that be a necklace to keep, you know, in case?