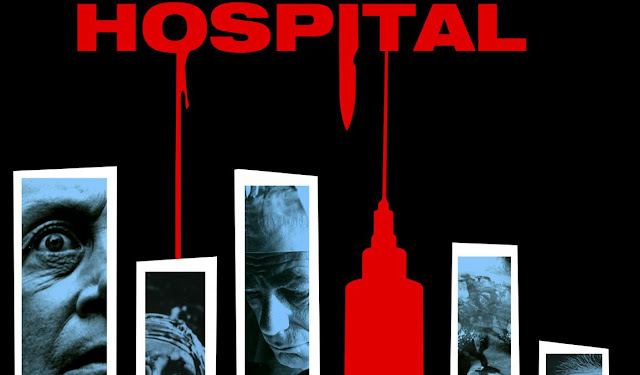 I don’t know much about the 1973 film “Horror Hospital”.  From what I can tell it was Antony Balch’s final film venture, and it was one that he both wrote and directed.  Maybe it was so good he knew he could never top it.  Maybe it was so bad he retired.  It is an impressive looking special edition DVD, so I eagerly await Starkwell and Lovelock’s opportunity to find out if it was a good or bad swan song.
[...]
[Opening scene involves a car equipped with a retractable sword and a basket for collecting the heads of the people whom the car’s sword beheads.  Two people are decapitated.]
Lovelock: I think more movies need to start that way.  Every movie.
Starkwell: I don’t think EVERY movie could pull it off.
Lovelock: Name one that couldn’t.
Starkwell: "Home Alone".
Lovelock: Movie opens with Shovel Guy chasing down Pesci and Stern with a sword car, chops off both of their heads, KABLAMMO.  Fades to black and then opens where the ‘regular’ cut of the film does, and says ‘earlier that week’ at the bottom.  Plus you could cut out the whole ‘Shovel Guy’s Granddaughter’ storyline that makes people cry.
Starkwell: Kind of changes the feel of the movie a little.
Lovelock: Whatever, dude.  Hey, is that Alfred from original "Batman"?
Starkwell: I don’t know that I would call Burton’s film ‘original’ Batman.
Lovelock: True, original "Batman" movie had exploding shark.
[...]
After only a few short minutes, it becomes abundantly clear to Starkwell and Lovelock that this film is gonna be one nutty ride.
[...]
[Zombies sitting at the dinner table.  The main characters come and sit down.  One girl starts screaming and two bikers come and take her away.]
Starkwell: So they just always wear motorcycle helmets regardless of whether or not they are on their bikes?
Lovelock: Maybe it’s in case they fall… that marble staircase looks awful slippery.
[...]
[Main characters passionately embrace.]
Starkwell: Considering they just met an hour or so ago, they seem to care an awful lot about each other.
Lovelock: Look at his hair.  Who wouldn’t fall for that right away!?!?
[...]
[Main Character Jason kicks Helmet Goon into pit of hot mud.]
Starkwell: He has a Shatneresque fighting style.
Lovelock: It’s no use, Jason.  You won’t get very far.
Starkwell: He did a good job in trying.
Lovelock: It’s no use, Jason.  You won’t get very far.
Starkwell: Why did they even bother explain what they are doing to the people?  Why give him a chance to escape.
Lovelock: It’s no use, Jason.  You won’t get very far.
[...]
[Jason is gassed and has a flashback recapping everything that has happened in the movie thus far.]
Starkwell: So we could have just started watching now and been totally up to date.
Lovelock: But then you would have missed all the romance scenes.
Starkwell: Wait… what?
Lovelock: It’s no use, Jason.  You won’t get very far.
[...]
Then there was a scene where the Old Bag was packing her things and it felt like it lasted a million years.  But then this creepy melty creature popped out of nowhere and killed her and Lovelock and Starkwell both stood up and cheered.  A little while later there was an awkwardly long sequence of the Midget Servant turned Helper Dude trying to break the two heroes out that you would have to see to believe.
[...]
[Drawn out flashback sequence about how Dr. Storm became the Mad Scientist he is today.]
Starkwell: Damn.  The movie almost made it without full frontal male nudity.
Lovelock: Almost only counts in horseshoes.
[...]
As the heroes destroyed the place and the weird shit-monster fondled Milly, the twist ending caused both Starkwell and Lovelock to laugh endlessly, mostly because there was absolutely no reason to have the twist in the first place.  The second twist ending, admittedly was pretty fucking awesome.  Solid movie.  A little insane, a lot over the top, but overall very enjoyable.
Documented by Kev D. and Posted at 19:25