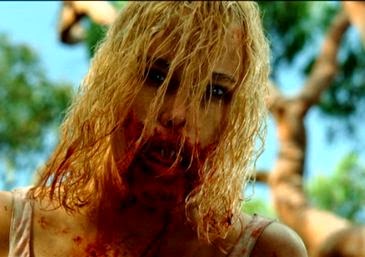 This relatively recent picture is a zombie film by way of “The Crazies” with a bit of a ‘slasher in the woods’ vibe mixed in for good measure.  From what I can understand, it is an Australian film, so if nothing else, Lovelock will probably enjoy the accents.

Lovelock: That’s some pretty fancy feathers he’s wearing on his head... for a caveman.

Starkwell: He’s drawing on a wall.  Clearly he’s more of a dainty caveman.

Anyways, then with the magical magic of film magic, it zooms ahead to the present day, and some young adults are traveling through the Australian wilderness, looking for the paintings that this caveman did, all so that some dude can get a PhD.

[There’s some guy in the woods killing rabid people with a machete.]

Starkwell: Wait, so they’re driving in the day and this guy is simultaneously killing people in the woods at night?  That’s just bad editing.

[I’m thinking maybe the slaying happened the night before?  Not sure.]

They find a tunnel that goes through a mountain that apparently leads to the drawings.  The main girl gets spooked while walking through the tunnel and nicks her arm on a rock.  The blood hits the ground and seems to AWAKEN THE EVIL.

Lovelock: Man, I can’t wait for the evil to take over and make them all eat each other.

[Blonde girl and nerd start doing it in a tent.]

Lovelock: Well, this is alright I guess.

Doesn’t take much longer to get going.  With a fairly short runtime, it makes sense.   Anyways main dude kills a killer bunny, and Lovelock made at least seventeen Monty Python jokes.

[She has leeches all over naked body.]

Lovelock: Well that’s one way to get some booby into the movie.

Starkwell: Sex scene and skinny dipping.  A great addition to the actress' resume, no doubt.

They develop main girl character a little.  She has the typical “crazy ex-boyfriend locked her up in a basement and tried to kill her (?)” baggage.  Comic relief guy seems to be nice.  Anyways, other than the Dumb Blonde and her Nerd boyfriend, the characters actually are fairly alright.  And then Dumb Blonde goes RABID. Slowly, grossly, and wickedly...  And the crowd goes wild.  There’s also some kind of mini bugs that seem to be eating things, like their tent… and their tires!

[Since they can’t drive, they plan on WALKING Rabid Blonde back to the nearest town on a stretcher.  At night.  Through the forest.]

Lovelock: So that’s their plan?  Build a stretcher?

Starkwell: What would you do?

Lovelock: I'd hit her with a rock until she stops wiggling.

Starkwell: Remind me never to get sick around you.

Lovelock: It took them all night to build that shitty stretcher?

[Blonde goes FULL RABID, with sharp teeth and eating a bunny.  Then she attacks the group.  PhD Dude attacks her face repeatedly with a shovel.]

Starkwell: Jesus.  I guess the PhD Dude is taking your approach?

Lovelock: Yeah but it's too late.  Spent all night building a stretcher he'll never use, instead of spending all night bashing her head in with a rock until she stops wiggling.

Starkwell: The 'wiggling' thing is creeping me out lots.

Then they show Rabid Blonde tackling a kangaroo and eating it.  It looks really fake and bad.  Plus the way she screams is super annoying.  At this point the movie turns into a montage of them setting up traps for their now rabid and homicidal friend.  It’s alright I guess.  Lovelock says he would prefer if there was more eating and less planning.  Admittedly, it’s over halfway through the film and we’ve only seen one rabid camper?  Not exactly the outbreak we were all hoping for.

[They trap her momentarily, but she escapes and takes a huge bite out of Comic Relief’s neck.]

Lovelock: That’s what I’m talking about.

[Later that night she comes back to the camp and drags Comic Relief away to finish eating him, and throw the carcass in the cave.]

Starkwell: Wait, is she feeding the cave?

Lovelock: I don’t know, but it certainly is all quite PRIMAL.

Then PhDude starts to turn and the remaining three draw straws to see who will kill him.  They seemed to not want to kill the Blonde, but now with him, he hasn’t even turned and they want to immediately knife him?  Starkwell straight up starts laughing at the movie.

[When only the Nerd and Main Girl remain, Nerd decides to fight back!]

Lovelock: So Nerd grew a pair?

Lovelock: Win-win as far as I am concerned.

So now Main Girl has to go in the cave, which she was already afraid of before there was a demon girl hunting her.  Now there seems to be some kind of tentacle or long tongue thing following her around (?)…  She runs into the other girl who is apparently still alive but… pregnant with a demon baby?  Other Girl dies, after stabbing herself in the uterus and carving out the demon fetus...  Main Girl is pinned down by the tentacle-tongues, and then some kind of Jabba the Hut creature comes out from the depths of CGI and tries to rape her repeatedly.

[She gets away… miraculously (?)… runs out of the cave and bashes Blonde Girl’s head in with a rock… ROLL CREDITS.]

Lovelock: Well at least they finally went with the rock.

Starkwell: So who was the guy with the machete at the beginning cutting up people?

Lovelock: If they had just listened to me before...

Starkwell: And just because she left the cave… why would that make her safe?  What is the evil just turned off now?

Lovelock: Hey, what were those swarms of flies eating things earlier in the movie?

Starkwell: And… and… just… FUCK THIS MOVIE.

One of the laziest endings ever.  Complete with bad CGI.  Hooray.
Documented by Kev D. and Posted at 07:42 No comments: 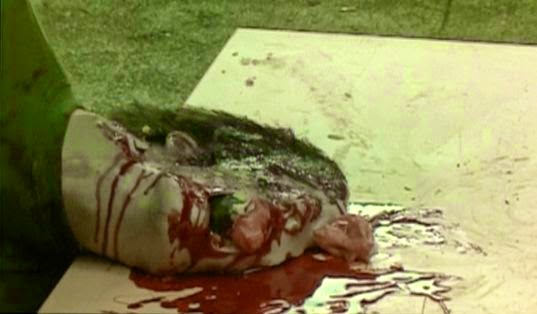 There’s a good chance that this is the only Greek zombie film that Starkwell and Lovelock will ever be able to watch.  From what I can tell, this is straightforward zombie mayhem, with just the right amount of gore, and the correct lack of budget to make it all pretty fun.  Or so I’ve read.  The name certainly isn’t particularly original.  Unless there is something lost in translation.  According to Google Translate, the official name of the film, “To Kako”, translates in English to “To Kako”.  So yeah.  Let’s see what the dudes think.  Hopefully Lovelock won’t say OPA.

[The Athens (?) skyline is shown, and we eventually hear construction noises, explosions, and then it cuts to dudes looking into a hole in the ground.]

Starkwell: Wait, why would construction workers go exploring in a cave?

Lovelock: So that the can unearth EVIL and we can have a movie.

[There are some serious nods to Raimi-style shots as SOMETHING creeps up on the construction guys and they are, I assume, killed.]

Then there was a confusing shot of an old bald dude watching soccer, seemingly forever.  And then it cuts to a guy at the game, and then to a bunch of people at a dance club.  Lovelock said ‘eurotrash’ like seven times.  It was pretty offensive.  And it seemed to piss Starkwell off.

[Zombies at the dance club.]

Starkwell: Either way, remind me to never go to dance clubs in Greece.

[Bald dude eats his wife in front of their daughter Jenny.  Jenny runs.]

Lovelock: Can I just say, the music TOTALLY takes me back to early eighties zombie movies… except with a more JAZZY feel.

Starkwell: At least the movie isn’t wasting any time.

[Seriously, it doesn’t.  Jenny runs out into the streets with a neighbor and they run around dodging zombie mayhem left and right.]

Starkwell: The only thing cheaper than the music is the zombie effects.

Starkwell: Still though… Jenny left behind her baby sibling.  What a dick.

Lovelock: Jenny sucks.  And she was WAY too touchy feely with her gross bald dad.

There's a Taxi Driver and a Sexy Woman that he is driving, and they see a crowd of zombies and assume it is just a crazy crowd of rabid football fans.  They're obviously not smart.  They pick up another dude, and he explains (or tries) to them that all Hell has broken loose.

Lovelock: There’s definitely a confused and chaotic “Nightmare City” vibe present here that is making me happy all over.

Lovelock: Well not THERE.

Lovelock: Okay fine… there too.

One thing that both Lovelock and Starkwell have noticed is how much better looking the women are than the men in this movie.

Lovelock: If the good looking woman to ugly man ratio is correct... Remind me to go to Greece on my next vacation.

Lovelock: How long would it take to drive there?

The movie goes on to introduce a lot of the characters, but they aren’t really developed much.  There’s the perverted Taxi Driver, who wants to lick the Sexy Girl’s feet (?), the Schoolgirl with the dead parents, and so on and so forth.  Up until now, honestly, neither Lovelock nor Starkwell actually give much of a shit about any of the characters.  The movie is focusing on two groups of survivors.  One of said groups just ran into some kind of soldier dude, and then, they run into the other group.  So now all of the characters are together at a Greek restaurant, eating.  At least they are making it easy to keep track of everybody.

Starkwell: I’m guessing they don’t call it Greek restaurant when in Greece, instead, simply, RESTAURANT.

Lovelock: How could they be eating, drinking and giggling at a time like this?

[Zombies show up at the restaurant, and the survivors go on a kill rampage.]

Starkwell: Did she just kick his head off?

Lovelock: A good zombie movie always allows zombie limbs and shit to be cut and ripped like room temperature butter.

[Then, amidst all of the terrific gore, Lovelock did a few roundhouse kicks.]

They immediately ditch the soldier, deciding he is crazy, and now they are down to only five in the group… Schoolgirl, Sexy Girl, Taxi Perv Guy, Old Dude and of course, Boring Girl.  That’s about as accurate a description as I can give, given the lack of character development.  Then there’s a scene where the Schoolgirl tells them that she is almost fifteen… honestly, the actress playing her looks to be well into her twenties.  It’s all a bit silly.  The comedy, on the other hand, isn’t very silly or effective at all.

[Randomly, Sexy Girl decides to bone Taxi Guy, and he starts by sucking all on her toes and shit.]

[Before he can bone her, she gets bitten and old dude blows her head off.]

Anyways, the movie carries on with the people fighting zombies, and to be fair, the gore is fairly creative, even if the story is not.  Some more people die, crazy soldier comes back to save the day, and in the end, they wind up at the soccer stadium surrounded by a hundred bajillion zombies charging them all at once.

Starkwell: Why would they choose to go and stand in the middle of an open field?

Lovelock: Because they are, the dumbest fucking assholes ever in a zombie movie ever.  The end.

The end indeed.  Fun, but man, the writers made some odd, possibly lazy, choices.
Documented by Kev D. and Posted at 08:58 2 comments: