The Man With Two Lives. 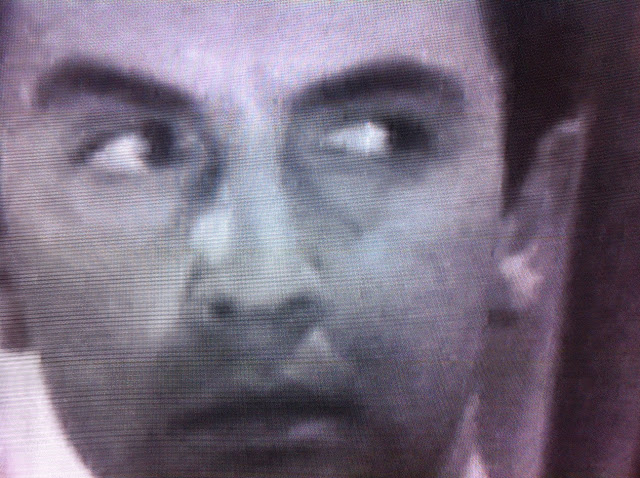 If not for box sets that combine a whole ton of random old movies, some films would likely be forgotten forever.  In some cases, the film is probably best left forgotten, but at times, long lost gems are unearthed.  Anyways, let’s let Allen Starkwell and Lionel Lovelock see if this moving picture from the forties is a gem or a dud.  The good news is, if it’s a dud, it’s only about an hour long.
[...]
[GRAINY OPENING CREDITS.]
Starkwell: I feel a little sea sick.
Lovelock: Life in the forties was shakier, full of motion sickness and scratches.
Starkwell: That didn’t make any sense.
Lovelock: Didn’t it?
Starkwell: No.  No, it didn’t.
[...]
[Engagement party.]
Lovelock: Am I crazy, or is this the worst party ever?
Starkwell: You’re not crazy.  Half of these people look like they want to kill themselves.
Lovelock: Yeah, and the other half already look dead.  From boredom.
Starkwell: I know how they feel.
[...]
They began to doze off, but then there was a surprisingly high speed car crash killing Philip, the groom-to-be, and they woke up laughing and commenting about the dangers of fiddling with radio knobs while driving towards a truck really fast.  Then Philip is brought back to life in the lamest mad scientist resurrection scene ever filmed.  Lovelock lost all hope.  Starkwell kept hoping for some social commentary to creep in.
[...]
[Philip has amnesia.]
Lovelock: Apparently in the forties, the undead were basically the same as they were before death, except they don’t remember much, and are quite grouchy.
Starkwell: Sounds more like an alcoholic.  And now he is at the bar – drinking.  Maybe the film is trying to comment on alcoholism, and how it can affect the people around you.
Lovelock: Well, it’s a considerably less severe side effect then eating people. And a lot less fun to watch.
Starkwell: …
Lovelock: That’s why I never drink.
Starkwell: Yeah, that’s why… wait… you do drink.
Lovelock: Yeah but not like people in the nineteen forties.
[...]
Then Philip started hanging out with bad dudes, and shooting people, and hitting on loose women.  It’s like he has TWO LIVES.  Starkwell liked the idea enough, and assumes that Philip is just downward spiralling into the pit of alcoholism, saying “I assume all of this is because of cursed alcohol.  In fact, he was probably drunk while driving the night that he crashed.”  Lovelock just said something about how much this all sucks.
[...]
[Philip chokes woman.]
Lovelock: Is Wayne Brady gonna hafta choke a bitch?
Starkwell: I love that as she is being choked she says, quite matter of factly, “your hands are on my neck, you’re choking me.”
Lovelock: Well how else would we know what is happening, since the director decided to pan over to the desk?
[...]
Then there was a lengthy discussion between the three oldest actors ever involving the soul, and the transmigration of the soul that put Lovelock to sleep.  Sometime after watching a shootout between Philip and to coppers, Starkwell turned to sleeping Lovelock and woke him up by shouting “SOUL TRANSMIGRATION” in is face.  Lovelock did not find it very funny.  Then the old fogies discovered that the Panini Serial Killer guy was executed on the night that they revived Philip.  And they all look at each other and thought SOUL TRANSMIGRATION.  Then Philip killed some people, and one of the old guys kills Philip.
[...]
[PHILIP WAKES UP IN BED AND IT WAS ALL JUST A TERRIBLE DREAM.]
Starkwell: Wait… there was no transmigration of the soul?
Lovelock: Man, fuck this movie.
Starkwell: Is he an alcoholic?
Lovelock: Man, fuck this movie.
Starkwell: So there's no actual re-animated corpse?
Lovelock: Man, fuck this movie.
[...]
Then it abruptly said THE END for a half a second and the DVD stops.  Lovelock let out a small but meaningful scream and Starkwell just sat there wondering what the point was.  Answer: There was none.
Documented by Kev D. and Posted at 18:45

Email ThisBlogThis!Share to TwitterShare to FacebookShare to Pinterest
Zombie Keywords: 1/4 - Terrible, 1940's, Black and White, It was all just a dream, Mad Scientist, Non-Contagious, Phil Rosen