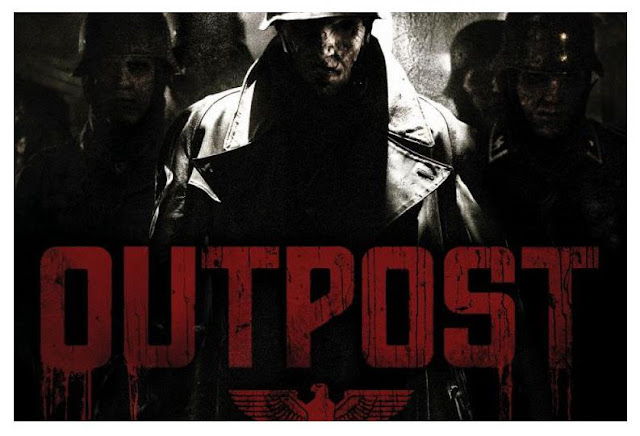 How the Nazi zombie thing ever took off as a sub-genre will always be a bit of a mystery to me.  At least the more recent incarnations doesn’t have them coming out of the water like the AQUATIC Nazi zombie movies, a sub-genre within the sub-genre.  As far as Nazi zombie films go, Steve Barker’s “Outpost” is supposed to be as straightforwardly scary as they come.  No comedy here, just scary Nazis coming back from the dead to terrorize people, and in this case, Starkwell and Lovelock.

[British soldier takes group of soldier/mercenaries on a secret mission.]

Lovelock: When a creepy British guy tells me not to take a job, honestly, I probably wouldn’t take it.

Lovelock: Interesting mix of characters… It’s nice to see all of the countries getting along.

Starkwell: Yeah, for the right price.

The movie then gets really creepy really quickly, as the soldiers enter some abandoned bunker and find old Nazi experimentation and torture type shit.  Lovelock and Starkwell were LITERALLY at the edge of their seats.  I’ve never seen anyone lean towards a television quite that hard.

Starkwell: Who stays in a place after finding all this?

Lovelock: So basically this guy is like a slightly creepy and evil Indiana Jones.

Starkwell: Indiana Jones fights the Nazis.  This guy is trying to harness their power…

The dead body pile starts cricking, cracking and moving and Lovelock let out a little gasp of horror.  Then the Nazis have them surrounded in a flash of light and a gust of ice wind.  Then they’re gone and so is Russian Soldier.  Now Lovelock and Starkwell aren’t just on the edges of their seat.  They are off the couch in a chair squat ready to jump and run away scared.

Lovelock: Rusty bullet to the eye.  “Outpost”, one, every other movie, zero.

The action then skyrocketed as Nazi zombies explode people’s brains with their bare hands and vanish without a trace.

[Turns out creepy bald guy is actually a Nazi, he kills the Scottish Soldier first.]

Lovelock: That’s why you never steal a Nazi zombie’s watch.

Starkwell: That’s certainly one reason why.

[They hatch a plan to stand guard while scientist dude does some sciencey shenanigans to stop the Nazi zombies.]

Starkwell: So the American Soldier is... into this?

Lovelock: I don’t know… but it certainly doesn’t seem like a good time to get stoned.

Starkwell: Yeah, “smoke’em if you got’em” shouldn’t be applied to a Nazi zombie life or death scenario.

Lovelock: I think if I ever wrote a movie with battle scenes, I would make it the first one to not have a commander screaming “HOLD…. HOLD… HOLLLLLLLDD…” at some point.

Well Captain Science sort of figures it out, but then the device explodes and the Nazis get back up, and proceed to have a STABBING FRENZY upon Irish Soldier.  Also everyone dies.  Horrifying movie.  Good horrifying, not bad horrifying.  Apparently there is a prequel set to come out this year. Starkwell and Lovelock exclaimed, in unison, that they cannot wait.
Documented by Kev D. and Posted at 21:10