Forest Of The Dead. 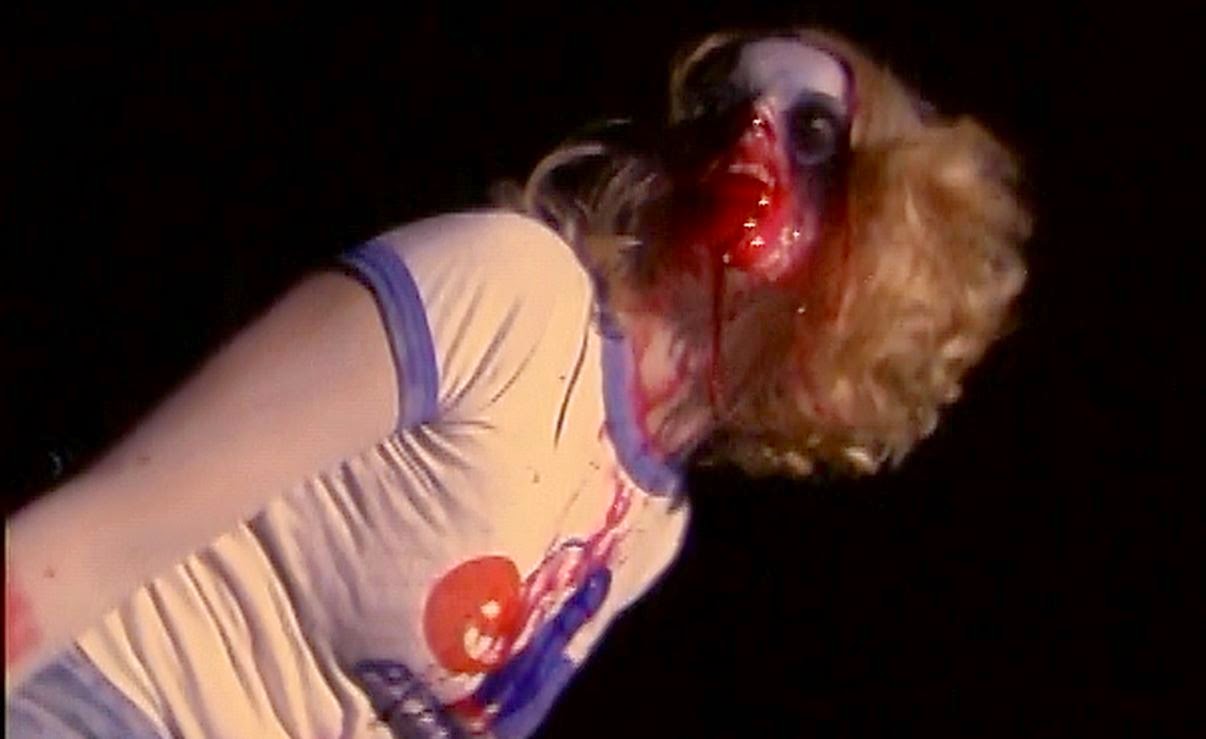 So the film is a cheap Canadian horror film.  The DVD, once you hit “play movie” it opens up with the cheapest looking, shot on VHS (EVEN THOUGH IT’S 2007), footage of the director, Brian Singleton, talking about the movie in an unbuttoned Hawaiian shirt, chest flowing in the breeze, while “drinking” from what looks to be a “brown-bagged” bottle of… champagne?  Apple cider?  I think we might need something stronger to get through this.

Starkwell: Why is always a bad “pop punk” song?

The movie is CLEALY just a movie made by a bunch of dudes for fun while on summer vacation.  It’s bad, but I could see maybe it would be fun to watch if you know the people in the movie.   To be totally fair, for what is clearly a no-budget movie shot by a bunch of friends, it’s alright I guess.  Bad writing, bad jokes, and no acting at all… but somehow Lovelock and Starkwell haven’t set fire to the TV yet… granted, it’s early.  The guys talking in the fake Quebec accents are REALLY bad.  Really fucking bad.  I would expect more from actual Canadians.  They're probably from Toronto.

The premise is pretty straightforward.  A group of teens go camping at an old campsite that is closed down and rumored to be haunted, and bad shit happens.  The problem is, it is taking a really long time to get going.  Also the novelty of this being backyard horror made by a bunch of dumb kids from Ontario is wearing off, and now everyone is getting crazy bored.

Lovelock: At least they haven’t played any more of that shitty “my friend’s band” music.

Then randomly the girl walks in on her boyfriend, one of the Quebec dudes, and he’s in his sleeping bag naked with the other Quebec dude?  Because, people from Quebec are gay?  At this point the movie lost Starkwell.  He got up, said something about being too old for this shit, and ran out of the room, top speed.  Just then, the movie shifted, and people finally started dying.

Lovelock: Why would kids from Quebec be drinking moonshine?

Then the group’s friends show up.  Basically a second group of shitty non-actors.  It’s like the movie has started over.  This second group is as obnoxious as the first.  Equally unfunny.  I think the best shot in the movie so far was one where the “afro” guy was “taking a leak”… but when he turned his head, you could see that he was just squeezing a Gatorade bottle.  Makes me think that they couldn’t afford a second bottle of Gatorade, so they were like “I think we got it”.

Lovelock: The nerd guy’s vest is different in every scene.

Lovelock:  These woods look like the same ones that Fred Penner shot his show in.

Lovelock: If it’s an abandoned campground why would there be an old basketball court… in an abandoned parking lot… next to a highway?  Wait they have a rock climbing wall?

Fred Penner had an album in 2008?  Crazy.  And Raffi has been upto some seriously rad shit.  Amazing.  Also he had a new album this year?  Oh also, the movie still sucks.  Nothing has happened for the last half hour.

[Zombies rip nerd guy in half and eat his intestines.]

Lovelock: I mean, it looked awful, but ‘A’ for effort.

[In the next shot, his vest is different again.]

Lovelock: If you are alone, being chased by zombies, and you wander into and old farmhouse, and you stumble upon a piano… WHY WOULD YOU HIT ONE OF THE KEYS?

In the end everyone dies.  And then there are ten minutes of ending credits and bloopers.  The guys who made this obviously love movies and each other, even if they themselves are terrible at writing and maybe even editing, and none of them can act.  And their friend’s band sucks.  They’re not half bad at gore though.  The effects are obviously cheap, but a lot of fun and pretty bloody.  They shouldn’t have wasted so much time setting up story.  If it just been full of a lot more of the gags that were all over the last twenty minutes, this might have actual been enjoyable.
Documented by Kev D. and Posted at 16:38