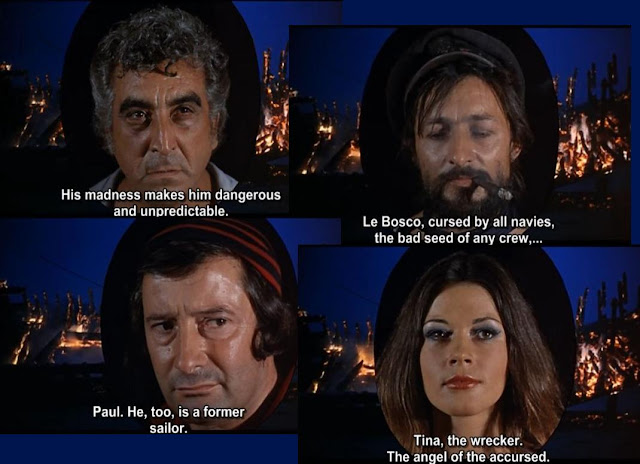 There’s not a whole lot I can do for Starkwell and Lovelock to help them prepare for a Jean Rollin film.  They already know to expect a slow pace, a heavy dose of weirdness, and, obviously, many tits.  Will this one exceed their expectations?  Meet expectations?  Only deliver the aforementioned tits?  Who knows?  Well, they will soon.  As is the case with all releases from “REDEMPTION”, before the film even starts, we are presented with an opening of a naked gigantic fake boobied woman, covered in blood and being bitten by what we can only assume is a vampire lesbian of some kind.  It always succeeds in setting the bar so high.

[We are introduced to some pirates...  We get a headshot of all of them, one at a time.]

Starkwell: Except that they, you know, rape and kill people.

[The pirates look around the dark beach with lanterns, for several minutes.]

Starkwell: Sooo… I guess we’re trying to establish that it’s dark… and they need lanterns.

Lovelock: Hey, Rollin… we get it.

Then they found a treasure chest, slowly examined a necklace, which the captain gave to his wench, the female pirate.  Then he felt her breasts for a while.

Lovelock: Is the answer “a better movie”?

Starkwell: Obviously while the two pirates rape and kill the Night Gown Girls, the Captain’s Wench dances naked on a rock.

[Then the Captain gets naked and they bone on that very rock.]

Starkwell: Good luck with this one.

Seriously, it takes like TEN MINUTES before the pirates finally just finish killing the Night Gown Girls.  In that time, we got to see naked Captain ass, and a bunch of simulated sex and/or rape.

Lovelock: Jesus Christ, I hope it was simulated.

It immediately cuts to a bar, the Captain is hungover, and a bunch of pirates are hanging out doing what pirates do, you know, licking exposed female nipples and dancing to lame accordion music.  Starkwell came back, because he wanted to know what Lovelock was laughing so hard about.  He decided to stay.

[The Captain sees apparitions of the Night Gown Girls as they apparently haunt him in the bar.]

Lovelock: That’s why I never drink.

Lovelock: Well, that and the calories.

[Blood drips from above onto the Captain’s hands.]

Lovelock: Why would the Night Gown Girls pour tomato juice onto the… oh wait… I see what that was supposed to look like.

The woman who runs the brothel seems to know about all sots of crazy mythology about the surrounding islands… also, for some reason, seems to have authority over the Captain.  Then the Captain FLIPS OUT and gets in a knife fight with another pirate… Starkwell and Lovelock laughed so hard that they actually started having trouble breathing.

Lovelock: Is that a sculpture of a naked woman with her legs spread hanging on the wall?  The boobs are all crooked and the artist made the vagina HUGE.  It's absolutely frightening.

Starkwell: Obviously, the bar fight was broken up by the Queen of the Brothel playing piano and singing nautical songs.

Lovelock: What year is this supposed to be, because that dude’s bell bottoms are out of this world, and seemingly quite advanced for this era of pirates?

As is the norm with much of what they have seen of Rollin's films, Starkwell had to at least commend him on the locations he used.  “The shipyard is magnificent”, says Starkwell.  But then, without skipping a beat adding in a “too bad it doesn’t help speed this shit up to at least a 'molasses' pace.”

[The pirates go back to finish off the Night Gown Girls.]

Lovelock: Considering all that they’ve been through, their white gowns are surprisingly clean.

Starkwell: They just don’t make night gowns like they used to.

Starkwell: Obviously her boobs come out of her shirt.

Shit stops making sense around this point.  Wench is hurt, and then she isn’t.  She’s yelling, but then she’s passed out.  Captain is carrying her at night, and then suddenly she is chasing the Night Gown Girls in daylight.  It is a hot mess.

Starkwell: Obviously she is in the water, and her boobs are out of her shirt.

Lovelock: Look at those things… could you keep them in a shirt?

The Night Gown Girls are suddenly in a courtyard and there is a woman in clown makeup with a red afro prancing around.  She leads them somewhere.  It takes a good few minutes to get there.  We get to see all of these 'few minutes'.  It’s around this point that none of us understood what the hell was going on anymore.  I’d say something is being lost in translation, but we all speak French.  I guess we don’t speak Rollin.

Starkwell: Were they not offered pants?

Lovelock: The actresses?  By Rollin? Probably not.

Starkwell: Well, I meant the characters, but, yeah… good point.

Then there was a scene where the Wench played with her breasts while the Captain cuddled and kissed a stuffed and mounted seagull sitting next to him on the desk.  He ripped the head off of the seagull, wrestled the now completely naked and screaming Wench, and then, they had sex.  Starkwell just left again.  It has been one hour and nothing has happened.  Unless, of course, you count Starkwell leaving the room twice.  Also, many sexy stuffs which, unfortunately, has not been sexy.

[Night Gown Girls get naked and walk towards the cell holding some dude.  Is it Satan?  Let's call him Mystery Man.  They are apparently going to trade their souls for super powers... I think...]

Lovelock: You would think it would be difficult to make naked women THIS boring.  But, alas, here we are.

Lovelock: In an ideal world, Paul Naschy would play half of the characters in this movie.  Also, the movie would only be twenty minutes long.

Lovelock: I wonder if in the script, it says stuff like “Character walks three feet, this should take roughly seventeen minutes.”

Starkwell: A thousand times no.  But, I forgot my phone.  Later.

So, yeah, after the girls have the orgasm they are now SUPER POWERED WITH DEVIL JUICE and out for revenge.  Maybe now something will happen.  Good thing there is only twenty minutes left and it took seventy minutes to get here.

[Night Gown Girls show up in the bar and have a staring contest with the pirates.]

[The Night Gown Girls make statues fall towards Wench in the courtyard.]

Lovelock: Totally where Lucas got the idea for the force.

[Starkwell wasn’t around to call him an idiot.]

Then the Wench was sort of crushed by a Jesus statue, but then like, was breathing heavily, then the clown was back and she was dying for some reason, and the Gown Girls started washing her makeup off, and then like random Priest dude is dead and Mystery Man is there and lost his power? Wench is alive?  I think… Fuck… I give up.

Lovelock: You wouldn’t think someone could confuse an audience so much by having so little happen.  But, alas, here we are.

Lovelock’s favorite part came near the end, when a drunken pirate tripped on the beach, landed head first into a gigantic empty bottle of alcohol he was carrying, and immediately died.  I think it was just refreshing to see something happen fast, instead of, as Lovelock put it, “PAINFULLY FOREVER SLOW”, which perfectly describes the entire movie.  Anyways, in the end, the Night Gown Girls still end up dying.  But not before Rollin shows the pirates raping them one last time.  And then Captain is possessed and kills everyone?  I think.

Lovelock: So essentially, the super powers that Mystery Man gave them, was ability to move a few statues, kind of survive ONE stabbing, and then, basically die.

Starkwell: You forgot BORING THE AUDIENCE.

Starkwell: Double Entendre for the win.

[Now they both left.]

I mean, what good movie DOESN’T END with a parade of random monks whom we have never seen before, followed by five whole minutes of the tide rising over a naked dead woman?  All of them you say?  You’d be right.  In conclusion, Rollin probably really drown that woman.
Documented by Kev D. and Posted at 08:30