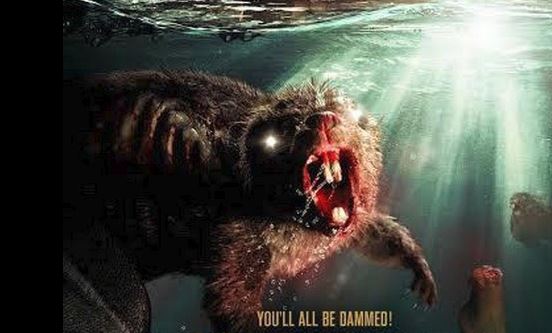 I figured the best way to bring the guys back into the fold here was with a good old-fashioned Netflix Film Fest EXTRAVAGANZA.  Plus with Netflix I don’t feel bad if they don’t watch the whole thing because I’m not out the price of a shitty physical disc.  Also, in general it’s just easier to document if they bail early in the film.  So.  Buckle your seatbelts, it’s gonna be a long night.

Not going to lie, when they saw the production company was The Asylum, they almost made me stop this piece of garbage before it started.

Lovelock: Take Jurassic Park, add a helping of We Bought a Zoo, and just a pinch of Noah’s Ark.  Now subtract Matt Damon and remove everything good about the stories I mentioned and… BOOM – you got yourself Zoombies, kind of.

Starkwell: We’ve watched one minute of the movie.

Lovelock: Yeah but I mean, for fuck’s sake look at the font they’re using for the credits.

Hard to argue with that?  Soon after that a bad CGI monkey died and reanimated and included MONKEY POV.  Lovelock and STarkwell both started laughing and eventually got real quiet and said “yeah no, please stop the movie” and “NEXT” and “HARD PASS”.  We almost made it past the cold open.

I think that we’re all okay with the concept behind this one, but it starts with this “CREEPY” old narrator.  Also known as bad start.  Starkwell says something about the fourth wall or like “can’t a movie just fucking be a movie.”  Then they got into a weird conversation about whether or not it should be “fucking be a movie” or “be a fucking movie”.  Meanwhile the movie continued.

[Entitled Princess goes with her “Bad Part of Town Punk Friends” to their apartment where they are squatting in a condemned building.]

Lovelock: first, she has it coming.  Second, I’m already totally fine if she dies, third, let’s move along to that part.

[We then meet the KERRAZY tenants at the condemned building.  It’s boring.]

Lovelock: This is boring.

Starkwell: Who would even save these boring people?  NOT WORTH IT.

Lovelock: Torch the building, and the people and this movie NOW.

So yeah, takes forever to get going and in the end it’s more like the Crazies of the Crazies was a super boring and shitty movie.

At a runtime of 75-ish minutes, they should be able to get through this one… maybe?

Lovelock: Is that Bill Burr and John Mayer?

After a legitimately funny opening with these two known people, it could only go down from there, obviously.  And it does.  BOY DOES IT EVER.  The actual movie, follows three girls on a vacation at some lakehouse, because EVERYONE HAS A LAKEHOUSE!  It’s mostly bad beaver puns and innuendos and excuses to get the actresses to take their tops of.

[Beaver attack in the lake.]

The short runtime saves it from being a full on zero, along with the fantastic beaver muppets, but honestly, I could have done without the human turns beaver stuff.  Somehow worked with that sheep movie but not with this one so much.  And why make a guy get his dick eaten?

I think it’s safe to say that we are all here for Corey Feldman.

Starkwell: This thing is 30 minutes too long.

That’s a Corey Feldman album reference, if anyone cares.  What a dull hunk of shit.  I think that was enough punishment for now.  Until next time.